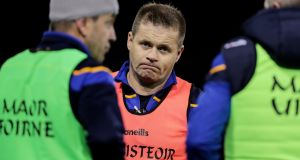 Na Fianna clubman and former GPA chief Farrell was handed the Dublin reins on Thursday, when he was announced as Gavin’s successor at the Dublin convention.

With just less than a month to go before Dublin face into an O’Byrne Cup semi-final, and with an Allianz League opener against Kerry on January 25th at Croke Park, there is little time for preparation.

“We’ve had discussions with Dessie about what he wants in the background,” Seavers said. “We have offered our expertise. We aren’t going to be, and we never have been, a county that puts restrictions on somebody. We trust him to do the job.

“We have a lot of the professionalism and methodology in place from Jim’s time, and we don’t see a need to break it up.

“From talking to Dessie he doesn’t see [the need] to either. We take all of the things that are going to make us better, and I don’t think there will be much alteration to what is already there – if it’s not broken why fix it?”

Seavers says Gavin’s boots will be tough to fill.

“It’s a hard act to follow; that page is now closed. Dessie followed the same apprenticeship that Jim followed, with All-Irelands at U-21 level.

“He told us in our discussions with him that the pain of losing the minor final to Tipperary in 2011 is as good a learning curve as it was for the senior footballers with Donegal.

“Dessie is well qualified. With him it will be a case of man managing, because of the ability of the guys. He does recognise that they are super athletes, and they are so humble. He’ll just build on that culture that Jim and his backroom team have.

“We have full confidence in Dessie that the team will still be there or thereabouts [challenging for All-Ireland’s].”

Seavers says that it is important for the progression of the team that Farrell has worked with many of the current Dublin players in the past at underage levels.

“It’s very important for Dublin; we tended to be ‘gung-ho’ over the years, a manager stepped down and everything went,” he said.

“As a county board we were conscious that we had a role in the background, that we had professional people – medical people, S&C and nutrition – that we took on board, and they now are our backroom team, and they are the people we can offer to the likes of Dessie and Mattie [Kenny].

“It takes a lot of pressure off that they don’t have to go searching for these things, that they are inherent within Dublin GAA. We have also identified that we have to create the ‘culture of Dublin’ – the love of the jersey and what it stands for.

“I think the legacy of this football team at the moment is that they are so humble, and they represent their county and their clubs with such dignity.

“You won’t find a word anywhere, either in-house, or around the country, that wouldn’t be good about them. That’s something we are aware of and wanted to build, no matter who the managers are that we pick at minor, U-20 or senior [level]. The culture of Dublin, and that we play the game the way we think it should be played – that’s very important.”