Miserly Meath play against type in success over Sligo

Despite uncharacteristic shut-out, Meath are far from the finished article 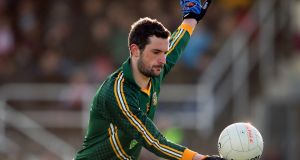 Meath goalkeeper Paddy O’Rourke whipped off his personalised goalkeeper’s gloves after the final whistle on Saturday evening and handed them to a young fan. A Twitter interaction later that evening revealed that the youngster fell asleep with the gloves under his pillow.

At least one Meath fan in the 7,212 crowd left Pairc Tailteann with a giant smile on his face, then, but as for the rest of them it was probably more furrowed brows.

A first win for Meath in the qualifiers since 2011, turning the corner on six consecutive defeats, was welcome, but the manner of the success was not very Meath.

Manager Andy McEntee instructed that the shutters be pulled down after conceding 5-25 across the previous two games and, in the end, their miserliness at the back, leaking just 10 scores, was as central to the outcome as the four late points that Mickey Newman and Sean Tobin registered.

“They set up completely different to what they had done all year,” noted Sligo manager Niall Carew afterwards, acknowledging his forwards were simply shut down. “Normally we are very clinical, but we didn’t take our chances. You can say that is good Meath pressure, too. You have to give them credit for that.”

Meath aren’t the finished article, though, far from it. Their counter-attacking appears laboured at times and their inside forwards were starved of quick, quality delivery.

Trailing by a point with 65 minutes on the clock, they pushed up strong on Sligo and got their reward, turning that deficit into a three-point lead in the space of 10 minutes.

Newman’s return to action for the first time this year, following ankle trouble, was decisive. He converted two frees, the first of which levelled the game, the second putting Meath into a lead they would hold on to.

The 2013 All-Star nominee is capable of adding dynamism to that attack if he starts next weekend in Round 3A.

“He’s had an ankle injury,” said McEntee of the Kilmainham club man. “It was very slow to heal and then he was just about okay and he jarred it again in a club match. Realistically, he has played very little football since the end of the club season last year.”

Sligo led 1-6 to 0-6 at half-time, their goal a scrappy, bundled effort from Gerard O’Kelly-Lynch.

Meath had the stiff wind in the second half and outscored Sligo by five points, though they still required that late burst of scores to see off the Division 3 side.

Captain Graham Reilly got through the hard yards, drawing the foul that led to Brendan Egan’s 58th minute black card and setting up points for Tobin and Newman.

Substitute Brian Conlon, Mickey Burke and Bryan Menton put in good shifts also, although it was far from a vintage Meath display.

“At times it looked like we might struggle to get across the line, especially when we were missing a few chances,” said McEntee. “But the lads showed a bit of character and a bit of guts, and they finished the game strong, even allowing for a scary moment when they had a ball cleared off the line at the end of injury time.”

1 TV View: Roy Keane but Daragh’s keener as Late Late fails to shoot the lights out
2 Ireland Slam England at the Gardens to open up Grand ambitions
3 David Brady says he's witnessed illegal payments of GAA managers
4 ‘Manchester United are lucky to have you’: Klopp responds to Donegal schoolboy’s letter
5 Mourinho says Spurs finishing in top four would be major highlight of his career
Real news has value SUBSCRIBE