Monaghan live to fight another day as they grind past Fermanagh 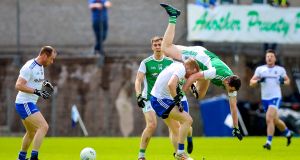 Monaghan survived a scrappy Round One qualifier against neighbours Fermanagh in Clones, who finished with just 12 men.

Malachy O’Rourke’s men avenged last year’s Ulster semi-final defeat in Omagh but it was a performance where they couldn’t quite shake off their neighbours.

The sides had just one point between them in the 72nd minute when Fermanagh were awarded a scoreable free. Sean Quigley’s effort however, tailed off to the right of the posts.

It was a miserable afternoon for Quigley, who also had a penalty saved on 54 minutes which gave the Erne men a chance to go level.

There was a sense that if Fermanagh could recreate the conditions they subjected Donegal to a fortnight ago they might cause considerable discomfort to Monaghan.

And they got off to a great start, Ryan Lyons drifting inside the cover and receiving a pass from Declan McCusker to shoot past Rory Beggan.

Further points came from a Lyons free and Daniel Teague from play, as Monaghan were forced into wides and speculative shots that dropped short and left Fermanagh in command.

A huge free from Beggan was followed by another Hughes spectacular to level. Veteran Vinny Corey ventured up front to split the posts and Monaghan went in at the break 0-6 to 1-2 up.

With captain Eoin Donnelly absent, Fermanagh were swamped on their own restarts. James McGrath was forced into going long regularly but possession was gobbled up by Monaghan who really turned the screw.

On the line, Fermanagh manager Rory Gallagher turned to Quigley late in the first half to try to find a point of reference for his attack, but they spurned a goal chance when Ultan Kelm burned through on goal, avoiding Ryan Wylie’s tackle, but his shot went across the face of the Monaghan goal and away to safety.

With Kelm punching holes down Monaghan’s right wing Fermanagh chipped away at the lead but three wides and three shots dropped short was to be their undoing.

Monaghan sealed it at the end when James McGrath’s short kickout to Declan McCusker was intercepted by Kieran Hughes who ran in and squared for Conor McCarthy to palm home deep into added time.