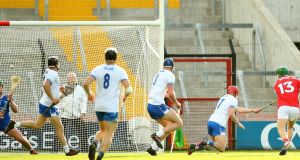 Cork remain in a good position ahead of next weekend’s final round of Munster SHC games as they saw off Waterford at Páirc Uí Chaoimh.

While Cork never trailed, it wasn’t a procession against the Déise, despite Páraic Fanning’s side’s chances of progression having ended with last week’s defeat to Limerick. A crowd of 26,521 witnessed the visitors make life difficult for the hosts for much of the game, but eventually Cork pulled clear of them in the closing stages.

The Rebels appeared to have taken control early on as Patrick Horgan followed his opening point with goal. From a delivery by Alan Cadogan, Horgan’s touch was exquisite, allowing him to fire past Billy Nolan.

Playing into the wind, Cork were on top and Séamus Harnedy’s point made it 1-4 to 0-3 on 11 minutes but Waterford responded well and two Stephen Bennett frees and a point from Jamie Barron had them back to within one, 1-4 to 0-6 by the 16th minute.

Indeed, the visitors could have led but Thomas Ryan overran the ball when presented with a half-chance of a goal while Shane Bennett sent a kicked effort wide on 25. At the other end, Nolan did well to save from Harnedy when Cork led by 1-9 to 0-9 and, after a Jack Prendergast point for Waterford, Nolan denied Bill Cooper. However, when possession returned to Cooper, he picked out Cadogan, who fired home to open up a five-point lead.

By half-time, that advantage was six, 2-11 to 0-11, with Waterford’s Peter Hogan and Cork’s Horgan exchanging points on the resumption. There was brief hope for Waterford as Stephen Bennett batted home a goal on 38, Ryan the provider, as the lead was reduced to a goal, but Cork had the next five points, three from Horgan, to move clear again.

Horgan’s ninth in the 48th minute meant that the Rebels were seven to the good, 2-18 to 1-14, and though Shane Bennett snaffled a second Waterford goal following good build-up play from his brother Stephen and Peter Hogan, a comeback was beyond them.

In the wake of the goal, Cork had five of the next six points, with Harnedy (two), Alan Cadogan and subs Shane Kingston and Conor Lehane all on target.

With scoring difference potentially coming into consideration depending on how next week’s final round of games go, the Rebels continued to add to their tally in the closing stages, with 13 points separating the sides at the end.