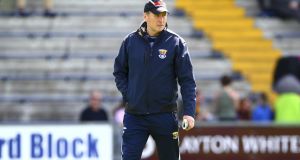 Paul McLoughlin has stepped down after Wexford’s defeat to Derry. Photograph: Ken Suttpn/Inpho

There was no hint of complacency from Derry as they fashioned a comprehensive victory over a feeble Wexford outfit in this opening round senior football championship qualifier at Innovate Wexford Park.

Having achieved victory over the model county in their final round league game before going on to lift the Division 4 title, Derry put that victory coupled with their provincial championship defeat to Tyrone behind them as they coasted through this 70 minutes, proving a superior class to their opponents who failed miserably through the opening 35 minutes despite playing with a stiff breeze.

Derry set themselves up for this result with blistering start as they controlled the outfield exchanges from the throw-in. Despite conceding the opening point after six minutes when Brian Malone moved forward out of defence linking up with Jonathan Bealin to kick over a excellent score, but that was as good as it got for the homeside.

Derry calmly played their way into the game. Dominant in the outfield exchanges they still had to wait until the eighth minute for their opening score. After Conor Devitt had extended the home side into a 0-2 to 0-0 lead, Derry eventually turned their outfield possession into scores with Emmet Bradley getting on the end of a move that prised open the home defence, to finish high into the roof of the net past a helpless Matt Doyle in the home goal.

While Wexford were battling to stay in the game, the gulf between the sides was becoming evident. After Michael Furlong and Bradley had exchanged points, Derry struck back for their second goal on 14 minutes, when Benny Haron played a low ball across the face of the goal for Shane McGuigan to apply the finish at his near post leaving the scoreline 2-2 to 0-3.

While both Jonathan Bealin, free, and Niall Hughes responded with points, it did little to inhibit the Derry dominance for Bradley kicked over a huge point into the breeze, while Ryan Bell after getting on the end of a move involving Emmet Bradley and Shane McGuigan shot low to the net, and a further Enda Lynn goal seven minutes before the break left Derry leading 4-5 to 0-5 at the interval.

The second-half was to follow much the same pattern as the opening period particularly after McGuigan had extended his sides lead with two points within three minutes of the restart. But with Wexford still unable to create any worthwhile impression despite a point from sub James Cash, the large attendance was treated to an exhibition style of football from Derry who simply played the ball around as they extended the Wexford defence with their composed attacking style of football.

Wexford had few ideas as they looked a demoralised side as they struggled even to stay with a Derry side that hardly raised a second half sweat. With defenders Brenda Rogers and Christopher McKaigue continually driving forward out of defence, linking up with their midfielders Conor McAtamney and Ciaran McFaul, Derry picked off points without any real pressue through McGuigan, Ryan Bell and Christopher Bradley, as they led 4-12 to 0-7, with ten minutes remaining.

To add to Wexford’s embarrassment, Derry utilised their bench through the second period but their dominance was not affected as they simly went through the motions of playing down the clock. Having scored four goals into the first half breeze they simply picked off their points through the second half, not having a single goal attempt, much to the relief of the home support.

Derry now go into the second round draw but for Wexford the best that can be said after a dismal year, football is ina real ‘crisis’ in the county.