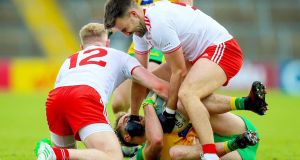 BY seven o’clock on Saturday evening, as the traffic peeled out of Cavan town for the borderlands, the general consensus was that Tyrone had been routed everywhere but on the scoreboard. So the pendulum swings again.

The one thing nobody predicted was a route but Declan Bonner’s young Donegal team took a huge stride forward with a strong and sometimes brilliant matinee performance against their enemy. It was their first summer win over Mickey Harte’s team since 2015 and leaves them an intriguing proposition now that the summer deepens.

Bundoran’s Jamie Brennan hinted at a dazzling future by posting 1-3 from play, each score an exhibition in speed and technique.

That return was the individual high point of a collective performance defined by cleverly angled runs, an enormous work rate, dominant central performances from Hugh McFadden and Michael Murphy and an immaculate hour in goal from Shaun Patton.

Eoghan Bán Gallagher, the McHugh cousins, Ryan and Eoin, and Leo McLoone repeatedly dissected Tyrone’s defence through Donegal’s lacerating counterattack and they bossed this encounter in a way that leaves Mickey Harte’s team in a vulnerable place in early June.

Peter Harte’s black card dismissal threw their offensive game plan into chaos after just 11 minutes. Their day worsened when Tiernan McCann was shown on the television screens to lean over Donegal defender Stephen McMenamin and claw at his mouth guard. McCann had to leave the field himself with a leg injury so his availability for Tyrone’s qualifier appointment is doubly jeopardised.

“Listen, I’ve only heard it downstairs,” Declan Bonner said afterwards of that controversy. I didn’t actually see it at the time. Stephen is made of stern stuff but if that is the case, then it is not acceptable.”

The Rosses man was pleased with the clean imagination in many of Donegal’s attacks but would have preferred a more clinical return on the scoreboard. It was 1-3 to 0-3 to Donegal after just eight minutes. Richard Donnelly opened the scoring after just 20 seconds and it was as if both teams forgot themselves after that score, attacking with absolute freedom and imagination from the get-go.

Tyrone should have had their a goal of their own during this period but Peter Harte, after being set-up by Cathal McShane, had his shot blocked by Ryan McHugh, who settled into his usual play-everywhere role.

That opening stanza suggested that this Ulster semi-final would ascend into one of those classic encounters that come to define era. But Tyrone suffered that serious setback when Harte was black carded after cutting across Ryan McHugh, who had just stolen possession.

“It didn’t seem to me to fit any of the criteria to fit a black card,” said Mickey Harte after full time.

“To me, it was just like a mistimed tackle and had a crucial impact on the outcome of the game. And of course the early goal for Donegal. Those two things combined left us in a bad place.”

They would score just 0-2 for the remainder of the half and one of those scores was a free from goalkeeper Niall Morgan. Instead, Donegal seemed to grow and mature before the highly engaged in the big canyon in Cavan town.

Their supporters got to watch a young team growing before their eyes. Brennan has a frightening ability to create something. Patrick McBrearty gradually swayed what was a riveting man-to-man battle with Ronan McNamee.

In the 37th minute, Murphy stationed himself in front of the Tyrone goal for the first time in the half. Gallagher found him with a long ball. Murphy rose, claimed possession and fired a point to complete a 1-9 to 0-5 half. A chill fell over the Red Hand county.

Murphy’s role was different here: freer, with fewer possessions but a devastating influence. There are so many strong ball carriers around the Donegal man that he can drift around the edges of the attack and then choose when to exploit the moment. He no longer has to create everything for himself.

The scoring rate slowed but Donegal’s defensive set-up completely thwarted Tyrone. At the heart of this was Hugh McFadden, who gave a career performance. The Killybegs man was at midfield but he constantly dropped back to double up on Cathal McShane, Tyrone’s inside threat. With Neil McGee shadowing Mattie Donnelly, and Donegal dropping back and pressuring the Tyrone ball carriers, they could find no way through.

Almost inevitably, the second half was more ordinary in comparison. Tyrone kept vaguely in touch through frees without ever really eating into that first-half deficit. They began to struggle with their own kick-out, a sign of a general malfunctioning.

“I was even more concerned about how easy Donegal were getting theirs,” said Mickey Harte. “Losing your own is always bad but they got theirs without any great difficulty and that didn’t please us very much.”

McCann was helped off. Colm Cavanagh, a totemic figure in this Tyrone era, had already left the field. Donegal sat back and forced Tyrone to play and kept their noses ahead by playing in spurts which yielded further beautifully worked scores.

In the end, they were controlled rather than rampant and there was a sense here that they might have inflicted a more brutal lesson on the scoreboard on last year’s All-Ireland finalists. Hugh McFadden finished his excellent evening’s work with a point late in the day.

And yet for all the one way traffic, when Richard Donnelly clipped a point in the 73rd minute, there was just four points between the teams.

On a day when nothing went right for Mickey Harte’s team, in a game when they looked disconsolate at times, they weren’t a million miles away on the scoreboard.

Michael Cassidy flashed another over the bar to briefly leave a goal in it and a few grains of sand left still. The tension suddenly filled the amphitheatre again. After all the beauty and freedom of the opening ten minutes, by the closing minutes the teams and counties were back in that place they knew best: locked between love and hate and scrapping to the last. They’ll meet again.