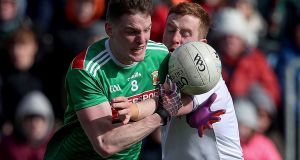 The Connacht Football Championship gets underway on Sunday with two games, 3,500 miles apart, and in both instances the potential for history in the making.

Although that’s probably stretching it a little: New York welcome Mayo to Gaelic Park in the Bronx on Sunday having never won a championship match, losing to Mayo on four previous occasions, the last of which was a 22-point defeat in 2014, 4-18 to 0-8.

London also welcome Galway to McGovern Park in Ruislip, having lost all nine of their previous meetings, the last of which was also in 2014 when Galway triumphed by 19 points, 3-17 to 0-7.

McCormack comes in at left half back and Evan Regan is named at wing forward, with Donal Vaughan and injured captain skipper Diarmuid O’Connor the players to miss out. O’Connor scored 2-5 when Mayo beat New York in 2014, his brother Cillian O’Connor also working back to full fitness.

Throw-in is at 2.15pm local time (7.15pm Irish time). Assuming Mayo progress they will move on will face either Roscommon or Leitrim on May 25th.

Galway manager Kevin Walsh has named four debutants for the shorter trip to London. David Wynne, John Daly, Antoine Ó Laoí, and Padraic Cunningham will all make their senior championship starts, having featured throughout the league.

John Daly is named at centre back and Michael Daly at midfield, with Shane Walsh at full forward alongside Corofin’s Ian Burke and Claregalway’s Danny Cummins. Damien Comer is still not back to full fitness after sustain an ankle injury prior to the league. Throw-in at McGovern Park is at 3pm.

Meanwhile the Gaelic Players Association (GPA) has announced two new scholarships open to members of the organisation in association with Institute of Technology Carlow.

The addition of these scholarships is key to the GPA’s aim to have extensive reach across the country with their education offerings: The scholarships will be available in six courses: Health and Sport; Business, Digital Marketing and Design; Humanities and Social Sciences; Science; Engineering; Computing and Data Science.

Paul Flynn, CEO at the GPA said: “These scholarships offer our players the opportunity to further enhance their career prospects through participation in highly sought-after graduate programmes, alongside maintaining their sporting pursuits while giving them the option to study closer to home, thus alleviating some of the pressures of travel.”