Malachy Clerkin: at his best, Paul Flynn was unimpeachable 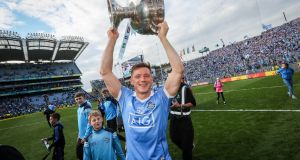 Paul Flynn lifting the Sam Maguire in 2017. He won six All-Ireland medals during a glorious era for the county. Photograph: Ryan Byrne/Inpho

Of all the garlands that hang around Paul Flynn’s neck as his Dublin career ends, there has always been something particularly telling about his four All Stars in a row.

He has walked away with 20 medals to his name – six All-Irelands, 10 Leinsters and four National Leagues, none of which is to be gainsaid. As a broad stroke, they tell of a career to compare with an elite few in the history of the game.

Drill down a bit and Gerry Callan’s essential book of Dublin football records tells the story in a more granular way. Flynn retires as the 25th highest scorer in Dublin’s history, with a tally of 13-89 across his 12 seasons in blue – nothing to sniff at either for a player who was neither an inside forward nor a free-taker.

He goes out at joint-sixth on the appearances list, level on 122 with Bryan Cullen, albeit likely to be passed at some stage this summer by at least one of Michael Darragh Macauley, Kevin McManamon and Bernard Brogan.

But for the pure, distilled, Paul Flynn of it all, those four All Stars at wing-forward between 2011 and 2014 are a monument to what he was and what he brought.

In the history of the All Stars, only three other players have won four consecutive statues – Pat Spillane (six in a row), Jack O’Shea (also six – at midfield!) and Páidí Ó Sé (five). You’re talking about gods here.

Think of the consistency it takes to do it day in and day out for four seasons in a row. Colm Cooper won eight All Stars, Mikey Sheehy won seven, Peter Canavan and Ger Power six, Tomás Ó Sé, Stephen Cluxton and Seán Cavanagh five. None of them put four back to back.

Every one of them had a down year somewhere along the way, often more than one. Summers when they weren’t just at it like they had been before. Or even just summers when someone else caught that little bit more of the eye. All Stars are subjective thing, often more a matter of taste than science. Sometimes, you’re going to lose a tight call.

Paul Flynn never did. He was nominated four times in his career and he won each time. At left half-forward in 2011 and then a fixture at 10 for the following three years. Dublin didn’t make the All-Ireland final in either 2012 or 2014 but Flynn was still a straightforward pick. Darragh Ó Sé had him at number one on a Gaelic football transfer list.

The why of it was simple. Through the early 2010s, if you wanted to build a Gaelic footballer from scratch, he was what you would have come up with. Strong in the air, athletic on the ground, ruthless in the tackle and accurate when he put boot to ball, especially with long-range kicks at the posts.

Flynn made himself that way. He was no big noise at underage – neither the minor or under-21 teams on which he played midfield so much as made Leinster finals. When he came in at the back end of Pillar Caffrey’s reign, he spent his first few years being a little too light for the fray and probably a little too polite as well.

He started the early rounds of the 2008 championship but was a bit-part player by the time Tyrone rinsed Dublin in the quarter-final. He played the full 70 in the startled earwigs Kerry game the following year. He was generally the second man in off the bench throughout the 2010 summer. And then he became Paul Flynn.

For the next six years, he started 35 out of Dublin’s 36 games. Across the first four of those years, he was completely dependable for Pat Gilroy and Jim Gavin. So much so that when is form dropped in 2015, it became a talking point whenever you assessed Dublin’s chances. Even so, his best display of the year came in the All-Ireland final against Kerry. When Dublin needed him most, he found himself for them.

The past few seasons have been stop-start. Gavin’s way with Dublin has been to overhaul them relentlessly and the occasional injury has seen Flynn squeezed to the margins with younger, fresher legs blocking his way back in. He was straight in when Jack McCaffrey pulled up early in the 2017 final but otherwise his minutes have been scarce. The dead rubber Super-8 game against Roscommon last year is his only championship start since the 2016 All-Ireland final replay.

Dublin have moved on. To Niall Scully, to Brian Howard, maybe in time to Seán Bugler or Ryan Basquel. Flynn played four games in the league but has struggled with his back since having surgery last year. Maybe he could have hung around for the summer. Maybe he wasn’t given the choice. Maybe, maybe. None of that matters.

What matters is that when he was at his peak, Paul Flynn was unimpeachable. The very best version of what he was.

Nobody can ask more from a career than that.