Premier boss delighted with his players’ commitment as championship beckons 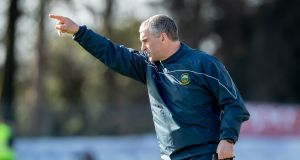 Liam Sheedy: “The players are doing everything I ask of them, and you can’t ask for anything more.” Photograph: Morgan Treacy/Inpho

Liam Sheedy is listing off some of the things that have changed during his second act as Tipperary senior hurling manager: the demands and commitment and work ethic of the players; the now properly treacherous nature of the Munster hurling championship.

That he’s slow to list the manager’s own role is notable and perhaps telling. If Tipperary are to win back the All-Ireland after three years then Sheedy definitely won’t be looking for all the credit.

“The manager’s role hasn’t changed that much in that he’s really just there to facilitate the group,” says Sheedy. “I’m very lucky to have an exceptional backroom team and I’m very happy with the group of players.

“The players are doing everything I ask of them, and you can’t ask for anything more. Plus Tommy [Dunne] and Darragh [Egan] are in there [as selectors], and the fact they’re all home grown as well helps us, and is important in terms of our ethos.”

Things have changed in subtle ways too.

Sheedy inevitably brings a change in expectation, especially after he unexpectedly stepped down from the position in the aftermath of the 2010 All-Ireland success over Kilkenny, halting the Cats’ famed “drive-for-five” in the process.

Still, whatever about F Scott Fitzgerald’s idea that there are no second acts in American lives, there is no shortage of them in senior hurling management; plenty of equally successful managers have tried it before and failed – Michael “Babs” Keating, Ger Loughnane, Eamonn Cregan, Michael Bond – either returning to their own county or, indeed, elsewhere.

The last hurling manager to realise such a successful return was Cyril Farrell, who managed Galway to the 1980 All-Ireland, took a breather, then came back and won two more in 1987 and 1988. Jimmy Barry-Murphy came unbelievably close, guiding Cork to the All-Ireland in 1999, and looked poised to win in his second term in 2013, only for Clare to snatch a late, late equaliser, then win the replay.

Speaking at the launch of the Munster championship, which for Tipperary gets underway on Sunday week with the trip to Páirc Uí Chaoimh to face two-time defending provincial champions Cork, Sheedy also pointed at the changes in the nature of the challenge.

“Cork haven’t been beaten in Cork for two years, are going for three in a row in Munster, but that’s the challenge, something we’ve got to embrace. I think last year everyone was getting used to the new format, now we’re all aware, more used to it. And I think it will be even better than last year.

“I’ve always been a massive fan of the Munster championship, I think it’s one of the best championships around, with massive competition around. We found ourselves outside the tip three last year, and that’s not a place any of the five teams want to be. So you’ve got to take it game by game.

“Most of these matches will be decided by a puck of a ball, and you do need that bit of luck as well. But we all know what’s involved, and it’s about performance, week in, week out.”

He’s not only member of that 2010 set-up to return: Eamon O’Shea came back on board during the league, having later served as manager from 2013-15: “Yeah, Eamon and myself go back a long way, as coach in my previous set-up, and as very, very good friends.

“Sometimes maybe our own fans would question our work ethic, around the pitch, but we’re trying to bring that serious work ethic, and I think all the boys are at that level. There is not one thing I would change about their preparation, they’ve given it absolutely everything, and they have been challenged every night. We’ve ticked all the boxes, and you’re at the stage now you’re just mad to get out.”

The least of the ambition is to improve on Tipperary’s early exit in last summer’s round-robin series of the Munster hurling championship. It saw them finish the round-robin stages without a win (they drew with Cork and Waterford) from their four games, after which then manager Michael Ryan stepped down.

Since that success in 2010, then the county’s first All-Ireland in nine years, they’ve landed just one more, in 2016, the open desire and determination to win back-to-back titles in 2017 falling just short when they lost to eventual champions Galway in the All-Ireland semi-final.

Clearly there is that fresh conveyor belt of 2018 All-Ireland winning under-21 players to draw on, plus the nucleus of the 2016 All-Ireland winning team, including Pádraic Maher, Séamus Callanan Noel McGrath, Patrick ‘Bonner’ Maher, and Brendan Maher, now back to full fitness after a cruciate ligament tear last season.

“He [Brendan] has minded himself, he’s hit all the dates, and he’s in great shape, playing at full pace, feeling solid on his knee, and he’s the ultimate leader, and a really good guy to have around the place.”