Kilkenny goalkeeper Murphy ruled out for at least the provincial championship 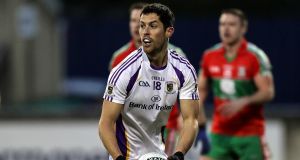 Rory O’Carroll: three-time All-Ireland winner is back in the Dublin squad for the championship. Photograph: Laszlo Geczo/Inpho

Rory O’Carroll’s return to aid Dublin’s five-in-a-row bid may have looked inevitable from the outside but according to Jim Gavin it was anything but.

Speaking at the launch of the Leinster championships yesterday, the Dublin manager praised the three-time All-Ireland winner’s fitness level after so long out of the game but said it didn’t necessarily follow that he’d go straight back in to take up where he left off four years ago.

“No, that is not the case. One needs to prove that one is playing well, and that’s only the first step. Now, once you’re back in with the squad, you need to fight for your jersey along with the other players who are on the squad. So that’s the next phase. And we don’t hand jerseys out. You have to earn the right, one, to be on the squad.

“Like, over the coming week, we’ll be inviting players in that have never represented the Dublin senior football team before, into our training, because they have performed consistently well in the club leagues and the club championship.

“It [his fitness] is a testament to an athlete and a player who is focused in what he wants, who is very ambitions, understands the athletic demands that are placed on inter-county footballers and who has obviously worked really hard on that on his own time. So, that’s the first step for any player who has been brought into the squad. The next step is to fight for a jersey.”

Time rolls on and Gavin won’t be making too many backwards glances. For the umpteenth time, he talked around the Diarmuid Connolly issue – no, he hasn’t been asked back in; anyone playing well for his club and available will be of interest, etc – but it’s clear he has long since decided to move on with what he has. When it came to the retirement of Paul Flynn, he was happy to pay tribute to one of his long-time on-field generals.

“From Paul’s perspective, it’s my job and the job of the management team to create that environment where they can excel. But a player needs to make that choice, if this is the right thing for the player?

“We’ve had instances in the past where players have decided to pursue other activities. Rory would be a good example of that, and when they come back we’ve also held an open-door policy.

“And if a player comes back and he is performing well with the club – and we’ve watched a number of games where he was – he’ll be invited back in.

“That’s the same for every player. If they play consistently well for their clubs and want to play with the county and make a choice – because it is a choice – then we’re interested.

“And that’s his choice and we respect that. I would hope everybody else does as well, because that’s the sport we’re in. It’s a volunteer sport and they give a lot and Paul, in particular, has given a huge amount to Dublin football.

“The biggest compliment I can pay him is that any time he got the privilege to wear the sky blue jersey, he left everything on the field for the betterment of the team. And what a great legacy to leave and what a great example to leave for the 2019 team to follow.”

Elsewhere, the main news to come out of the launch is that Kilkenny are to be without goalkeeper Eoin Murphy at least for the provincial championships and possibly beyond.

Brian Cody confirmed that last year’s All Star goalie fractured a bone in his knee playing for his club and will miss at least seven or eight weeks of action. Murphy is one of a host of injuries Cody has to deal with as they prepare to play Dublin in their Leinster championship opener next Saturday.

“Eoin Murphy, Cillian Buckley, James Maher, Conor Delaney, Rob Lennon, are all definitely out,” Cody said. “Richie Hogan has been struggling with an injury all along. He is in training now. So, that’s our situation.

“Not a hope for week two. For any of them. Cillian has been out for a long time. He’s back. Not hurling training, just running. We don’t have a timeframe for him. He’s such a focused fella. He’s absolutely intent on getting back. When? Who knows?”