Mayo up and running with one finishing tape on their horizon 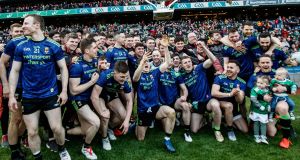 Mayo celebrate their league final win in Croke Park. It was a deserved success and long-time observers were impressed by the game management that conclusively saw off Kerry. Photograph: James Crombie/Inpho

“The biggest thing is that it endorses and reinforces the work that we are doing on the training field. It’s a bit of tin and I’m sure in five weeks’ time, Carlow or Westmeath won’t care what Dublin have done,” – Jim Gavin, April 28th, 2013, after Dublin’s league final victory over Tyrone.

That reaction to a league title, Dublin’s first of five in six years, encapsulates the value of the competition. In what has since the turn of the century become a steadily more compressed calendar, teams have frequently won All-Irelands after first making a statement in the league.

That statement is as much to the county itself – validation that they’re on the right track on interconnected roads.

After Mayo’s serial disappointments in the championship – four All-Ireland finals plus a replay without return – this decade, the winning of a first league in 18 years may have provoked scepticism in some quarters about maintaining that chain of causation but it has also triggered a new confidence in the county.

This wasn’t so much related to the actual title, although that was welcome, but to proof of recovery after a difficult 2018 and evidence that the team was primed for championship rather than, as was the case last year, scrambling for fitness and form.

If Dublin had recorded another league win, it would certainly have been seen as strengthening their hand in advance of the campaign for five-in-a-row. So it’s hard to see as outlandish the idea that Mayo have positioned themselves well in their pursuit – which makes Captain Ahab look unmotivated – of a one-in-68 years.

James Horan’s return to management has been propitious in two ways: feeding the narrative of unfinished business from his tenure earlier this decade and picking up from a low point, Mayo’s failure last year to reach the semi-finals, or even the last eight, of the All-Ireland championship.

His management style is said to have been finessed in the four years since he last held the reins. More directly involved, he didn’t go the route of appointing a high-profile coach, like Cian O’Neill or Donie Buckley, and spends more time in the thick of the training ground.

He also went to New York with officials in order to be hands-on with the logistics in advance of the county’s opening championship fixture, a trip which will include a training camp.

The league was an opportunistic success in some ways. Had a line been drawn on the first weekend in March it might have been a different story. In successive matches, Mayo had lost to the very two teams against whom they needed to lay down markers, Dublin and Galway.

Holders Dublin would for the first time in Gavin’s tenure lose three matches whereas Galway had a place in the final in their own hands going into the last day of the regulation campaign but lost to a Tyrone team who finished the league like a whirlwind but whose poor start prevented them staking their own claim.

That’s how a league works though. You accumulate your total and set it against everyone else’s. Mayo had also stated their case by taking away Kerry’s unbeaten record in Tralee on the way to second place.

Taking the campaign as a whole, there is further encouragement. The defence performed better in the league than in any season for six years, conceding an average of 13.1 points – a 2.5-point reduction on last year.

Mayo had both momentum and confidence in this year’s final. After the bad results against Dublin and Galway, this was an opportunity to finish strongly, a shot to nothing.

It was a deserved success and long-time observers were impressed by the game management that conclusively saw off Kerry. Mayo’s bench added value when the match was in the melting pot. Colm Boyle, the four-time All Star whose form creaked at times in the league, came on and in injury-time cleared a ball off the goal-line.

That late chance for Kerry and David Clifford when Mayo led by only two serves as a memento mori within the county, the glimpse of an alternative ending where they lose yet another national final.

Instead, another replacement Andy Moran artfully picks out Ciarán Treacy, also off the bench, and his finish for the goal was ambitious and clinical.

Winning the league and doing so in such a capable fashion were decent positives to emerge from the campaign but of at least equal importance has been the emergence of much-needed new talent.

Matthew Ruane has had a really impressive campaign at centrefield, his mobility and scoring – critical goals against Kerry in both matches – taking pressure off Aidan O’Shea, who has looked in great shape throughout, in what has been a well-balanced pairing and all the more critical, as Tom Parsons is still in recovery from last year’s awful leg injury.

The defence, as mentioned, tightened but the county’s Achilles’ heel this decade has been inability to turn possession into scores and there was also good news in attack. Fionn McDonagh has, pace, judgement and scored consistently even if the 1-3 against Tyrone was an outlier.

He was injured for the concluding stages of the campaign but there was further encouragement. James Carr, his career stalled because of long-term injuries, came in towards the end of the campaign and was lively at corner forward in the final and commended by Horan afterwards.

Treacy, whose goal wrapped up the title, is another whose game-time has been affected by injury but can have an impact on the championship. The point about these players isn’t that they all drop straight into summer starting positions but they add significantly to the strength of the panel and the bench options as the summer unfolds.

Leading forward Cillian O’Connor missed the league but is expected back in the coming weeks.

New York and Roscommon, who haven’t beaten them in 18 championships, are the immediate challenges but ultimately at the back of everyone’s mind is the likely Connacht final meeting with Galway, against whom they have stalled in each of the last three years.

This time, however, Mayo are up and running with only one finishing tape on their horizon.