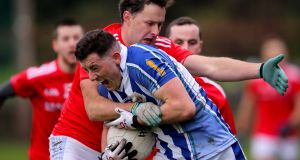 This was one of those games where the winning team tries every key before eventually just kicking the door down. Ballyboden didn’t lead until almost three-quarters of the way through and weren’t able go more than a point ahead until six minutes from time. You wouldn’t guess it to look at the final score but there was still just a kick of a ball between these teams as the game ticked past the regulation hour. It looks like a hiding. It wasn’t.

At the same time, it would be stretching matters to argue that Newtown Blues really looked a threat to win it. Despite going in level with a man advantage at the break, they didn’t really go after the game in the second half.

The Louth champions seemed at times to be cowed by the bigger reputations Boden brought down the M1 with them. After going a point up early in the second half, the Blues managed only a point from a free the rest of the way. It was as though they couldn’t see themselves holding out. If you think you can or you think you can’t, you’re right either way.

“There was nothing in it at half-time,” said Ballyboden manager Anthony Rainbow afterwards. “There really wasn’t. I think if you look at our second half performance in terms of our bench - Mick [Macauley] coming on, Conal Keaney coming on, they made a huge difference to us. James Holland came on and gave us more pace around midfield, Seán Gibbons came on and was very composed around the defence. So I think the subs that we made really drove it on.

“Then you look at Colm Basquel and Ryan Basquel - the amount of touches they got in the game were really above everybody else. So it’s a combination of a lot of things but I think in general, if you look at the conditioning of the players that really had a lot to do with it in the last 10 or 15 minutes. We’ll enjoy today, we’ll enjoy tonight and we’ll have a big focus in the next two weeks.”

This was winter football. Cold day, sticky pitch. No frills, no thrills. The two teams packed their defences and dared the other to break them down. Robert Carr landed a bomb for Newtown, Cathal Flaherty nailed a mirror-image one at the other end for Boden. Otherwise, it was generally frees that supplied the scores. At half-time, the sides stood level at 0-3 to 0-3.

For the home side, you’d have said that was the first part of the job done and done well. If they were to overcome the Dublin champions, getting to the break on terms was a pre-requisite. Not only did they achieve that, they got in a man up as well.

The game had concentrated patches of niggle in it and one such bout of rassling led Ballyboden corner-back Flaherty to swing a dig right at the millisecond David Coldrick looked in his direction. It wasn’t the most violent swipe you’ve ever seen on a football pitch but since Coldrick was more or less staring into Flaherty’s eyes as he threw it, the red card was unavoidable.

And when Newtown came out and attacked the opening period of the second half, it felt like there might be possibilities open to them. Colm Judge had been playing as a deep-lying sweeper in the first half but with comfort of the extra man, he drove forward on an overlap after 34 minutes and kicked a fine score from the left to put the Blues a point up.

It wasn’t a lead built to last the duration, obviously, but it was a start. And even when the Dublin champions came back at them and kicked the next two through Ross McGarry and a Ryan Basquel free, Newtown rallied to draw level with a stunning free off the deck by Andy McDonnell. Into the closing quarter-hour and in a game that looked choked off at either end of the pitch, they had at least a puncher’s chance.

Problem was, they barely had a swing for the rest of the game. Boden brought on Conal Keaney and between him and the Basquel brothers, the ball started sticking in the Dublin champions’ forward line. Colm Basquel scuttled in for a fisted point, Keaney swung over a bravura effort from a quick free, Ryan Basquel stitched one of his own.

Michael Darragh Macauley came off the bench for the last five minutes - Rainbow said afterwards that they were trying to mind him and not aggravate his groin issues. He still had time to make a bustling run into the Blues defence, where he was tripped by judge. Penalty. Black card. Colm Basquel chipped another point.

From the kick-out, Macauley sent Colm Basquel away to lob a lovely goal into the top corner and pad out the numbers. Newtown didn’t deserve to win but they didn’t deserve that either.

For Ballyboden, the beat goes on. Garrycastle are a fortnight away, a welcome break after a hectic few weeks.

“In some ways, we’re used to it,” said Rainbow. “If you look at the way Dublin is structured, we have games every 10 days, two weeks, sometimes every week. This is our third game in a row and you nearly prefer it that way because you’re getting game after game after game. You’re driving that winning mentality forward, you’re not waiting for games to come. That has suited us over the last few weeks.

“I think as well, the way the Dublin championship worked out helped us. Because our semi-final against Jude’s and our final against Thomas Davis were tough games in tough conditions and that’s helpful coming for a game like this. It got the players into the right frame of mind for a challenge like this.”