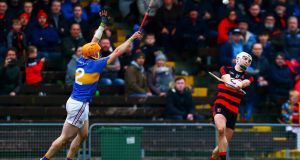 Ballygunner’s Dessie Hutchinson gets his shot away during the AIB Munster Club SHC semi-final victory over Patrickswell at Walsh Park. Photograph: Ken Sutton/Inpho

As if liberated by last year’s long-coveted Munster title, Ballygunner followed up the previous week’s swatting aside of Clare champions Sixmilebridge with an ultimately comfortable win over a star-studded Patrickswell at Walsh Park.

The only change before the throw-in cost the Well their former All Star goalkeeper Brian Murray, who had a back strain and was replaced by Limerick under-20 goalkeeper Jason Gillane, who had been named at corner forward. Andrew Carroll came off the bench.

For most of the first half a certain narrative was at play. A low scoring match on a heavy – but in fairness, improved – Walsh Park surface was favouring the champions, who were winning the vital contests and threading enough useable ball into the forwards to open up what looked a decent gap on any November scoreboard.

It took the Limerick champions all of 20 minutes to get on the scoreboard, thanks to a free from Aaron Gillane, but the Waterford side responded to lead by five, 0-6 to 0-1, with just minutes left before half-time.

The returned soccer prodigal son Dessie Hutchinson had been to the fore – as ever this season – with four points from play and a constant threat every time he got the ball.

Ballygunner’s accomplished half-back line of Shane O’Sullivan, Philip Mahony and Barry Coughlan – supplemented by Paddy Leavy in a sweeping role – made space and possession hard-got for the Limerick champions.

Then, coming up to half-time, Patrickswell sparked into life. Their revival was driven by the county contingent. Diarmuid Byrnes thundered into the game at centre back, exploiting the deeper role being played by Pauric Mahony. He knocked over a free from his own 45 to get the team moving in the 25th minute and then initiated the move that led to another point within a minute.

That score also featured Cian Lynch and Gillane, who finished it and when there was only a point in it at the break, 0-6 to 0-7, hopes were high that the Limerick club had positioned themselves ideally for the second half.

Instead the challenge withered and died. With his brother Pauric experiencing radar issues – albeit in an indefatigable and hard-working display – Michael Mahony took up the slack to shoot four from play at the start of the second half and put Ballygunner back in control, 0-11 to 0-6.

If the brief revival before the break owed much to Patrickswell’s highest-profile players, the champions’ success was built around getting to grips with them. Conor Sheahan and Leavy restricted Lynch’s influence to one barnstorming run and a couple of nice touches, whereas Gillane struggled to get into the match apart from a productive spell in his team’s purple patch at the end of the first half.

Ballygunner now go on to face Borris-Ileigh in the Munster final at the end of the month. Their progress has been formidable compared with last year’s harum-scarum collection of close-run things.

“Look, the lads put in another great performance, in fairness to them. And that was hard after last week, after going up to Sixmilebridge for that game – you could see the amount of strapping on our lads after that game. But that’s huge credit to our backroom team. All the week, they were able to get the lads out onto the field.”

He also paid tribute to two of his emerging talents.

“Michael [Mahony] started the All-Ireland semi-final last year but I don’t think he started the Munster final so he’s one of the lads who has really pushed on this year. You can see the difference he’s made and he’s going to get some confidence out of that display today.

“Look at the other lads as well – Paddy Leavy is an ‘old’ minor, in that he’s still under 18 years of age. To see what he did today, marking Cian Lynch, for him to be able to take on that challenge is great for the future of the club and of the team.”