Connacht SFC semi-finals: Silke gets Corofin over the line

Galway champions claim their place in another Connacht final 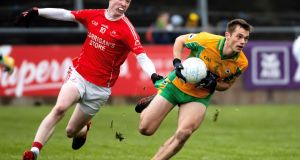 Liam Silke’s goal was crucial as Corofin advanced to another Connacht final at the expense of Ballintubber at Tuam Stadium. The reigning All-Ireland champions won their seventh Galway SFC title in-a-row last weekend but were made to work here.

Kevin O’Brien’s men held a narrow 0-5 to 0-4 lead at half-time and Corofin had to wait until the 32nd minute for Jason Leonard to secure their advantage at the break.

They started strong in the second half, though, and Liam Silke scored his goal shortly after the restart. But Ballintubber fought back and substitute Darragh Silke had to finish things off for Corofin.

The north Galway men played against the breeze in the opening period but struck first through the boot of Michael Farragher. Kieran Molloy, being deployed in midfield this term, took his opportunity as well moments later, and Corofin looked set to go rampant.

But they didn’t score again until the 14th minute as Micheal Lundy and Martin Farragher spurned chances. Ballintubber were guilty of their own failings but Diarmuid O’Connor landed an inspirational score.

Martin Farragher and Ian Burke did the hard work in the build-up for Liam Silke’s point as Corofin got their noses in front again and they should have had a goal in the 22nd minute. Liam Silke had time and space to get a shot off but Brendan Walsh saved brilliantly before Molloy missed with the rebound.

Ballintubber were still right in contention and Cillian O’Connor knocked over his first point from a free with three minutes of normal time left in the first half. But Corofin took a one-point lead into half-time after Leonard’s last ditch free.

It only took three minutes for Corofin to score their goal upon the resumption. Liam Silke was completely unmarked, caught the delivery from Michael Farragher and finished low to the net. Leonard sent over a free and Corofin were clear.

However, Cillian O’Connor scored his third free and that was followed by points from full-back Brian Murphy and Alan Plunkett.

Only a goal separated the sides and Cillian O’Connor closed the gap further with his fourth and fifth free, the latter came in the 61st minute.

There were five minutes added but Darragh Silke’s free sealed it.

1 Paul Clarke steps aside from Dublin role
2 Exiled Seán O’Brien not ruling out a third Lions tour
3 Seán Moran: It won’t take much before cancelling All-Ireland looks like a solution
4 Heroic insanity: When Michael Dunlop raced home in memory of his father
5 Madigan’s primary goal is Ireland caps after switch to Ulster
Real news has value SUBSCRIBE