Borris-Ileigh back in a Munster final after 33 years 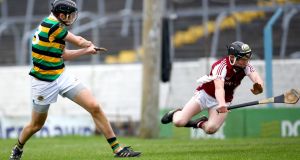 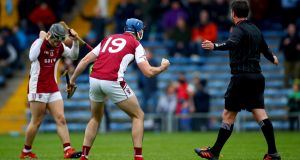 Borris-Ileigh’s Kevin Maher and Ciarán Cowan celebrate at the final whistle after the victory over Glen Rovers. Photograph: James Crombie/Inpho

In front of a disappointing attendance of 2,317 the newly-crowned Tipperary champions made light of the six- day turnaround since their county final victory over Kiladangan to overcome the Cork representatives.

With little or no breeze to contend with Borris-Ileigh thundered into the game from the throw-in with three sublime efforts from the excellent Conor Kenny and another from full forward Jerry Kelly.

Glen Rovers appeared all at sea in the opening stages and struggled to cope with Borris-Ileigh’s movement before a Patrick Horgan goal in the ninth minute served to settle the nerves and provide a timely fillip. Horgan’s goal coupled with a long-range Dean Brosnan point had the Cork representatives back on terms by the 10th minute.

Johnny Kelly’s charges continued to dominate the exchanges though, with further efforts from Kevin Maher, Conor Kenny and Jerry Kelly ensuring they led by 0-8 to 1-2 with 20 minutes elapsed.

Glen Rovers, minus their influential intercounty star Stephen McDonnell (broken finger) were noticeably ring-rusty. But despite a poor opening half they were by no means in serious trouble at the break, trailing by 0-10 to 1-3 to a far sharper Borris-Ileigh side who really should have converted more of their scoring opportunities in a dominant opening half.

Within 16 seconds of the resumption though JD Devaney cut a swathe through the Glen Rovers defence for a cracking goal to fire Borris seven clear and additional points from Jerry Kelly and a Brendan Maher 65 had the men in maroon well and truly in the driving seat, 1-13 to 1-3.

Glen Rovers made a double substitution just six minutes into the second half and by the 48th minute their entire full-forward line had been called ashore. A second Horgan goal on 44 minutes from a close-range placed ball offered Richie Kelleher’s charges some semblance of hope before two further points from Horgan narrowed the gap to five.

Rovers whittled the gap further to three by the 53rd minute before efforts from Kevin Maher and Conor Kenny afforded the Tipperary side some much-needed breathing space.

Borris-Ileigh’s backs remained steadfast though as Glen Rovers threw everything at them in the dying minutes with massive interventions from Liam Ryan and Devaney keeping the Cork side at bay and ensuring Borris-Ileigh ran out deserving three-point winners and a first Munster club final appearance since 1986.

1 Liverpool among clubs to argue against paying €384m TV rebate
2 European clubs must take lessons from financial demise of former greats
3 Amber Barrett back in action as women’s Bundesliga resumes
4 Sideline Cut: Vignette shows why Bird is the true shark in The Last Dance
5 Decision expected next week on staging of College Football game in August
Real news has value SUBSCRIBE