Imprecision on both sides was a problem, the replay will take place next Sunday at 3.30 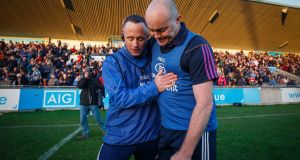 There were times at Parnell Park on Sunday when Kilmacud looked likely to fall victim to the old British political cliché about the hand that wields the dagger not lifting the crown.

In a tense and for the most part scrappy Dublin final, Anthony Daly’s team, which had eliminated double-All-Ireland champions Cuala in the semi-final, looked in danger of losing at the last hurdle for the third successive year.

A goal by Aidan Mellett pushed Ballyboden two ahead with normal time nearly up but in possibly the critical response of the hour, from the puck-out Cian MacGabhann pulled back one point, leaving just about time for Marc Howard to level the match with a long-range free and he could have won it with another but just missed to send the match to extra time.

Ryan actually had the winning of it in the dying seconds of the 80 minutes but instead of shooting a point, took the ball on a step or two, lost control of it and his despairing pull was easily blocked by Matt Collins.

“I was worried all week,” said Daly afterwards. “We were being blown up after the Cuala match - there wasn’t a word about us up to that. You do always worry that that gets inside fellas’ heads. I was a bit worried coming in, I have to say.

“I knew they were very, very focused. I wondered was our focus quite as good as it was for Cuala and I don’t think it was. There’s nothing like a match like that to refocus everybody. Try and get the bodies right for next weekend. That’s all we can do.”

Ballyboden had won six of the previous 11 titles and were glad to be coming in as outsiders after their opponents’ big win in the semi-finals and they had every chance to upset the odds, having recovered from the concession of an early goal, taken by Seán McGrath.

They had the advantage of a healthy wind but hit nine first-half wides, as Kilmacud’s defence resisted doggedly with veterans Ross O’Carroll and Ryan O’Dwyer impressively energetic throughout the long, gruelling afternoon.

The match turned in Ballyboden’s direction in the last 10 minutes before half-time. A goal variously credited to full forward Paul Doherty or - in the team dressing-room later, goalkeeper Gary Maguire who had hot the long free that ended up in the net and at the break it was 1-8 to 1-5.

Howard was to the fore for Crokes in the second half. Harnessing the wind for his frees, he was the chief scoreboard operator for the Stillorgan side, scoring six points, including one from play.

Gradually they established control and although their opponents were still capable of threat - Ryan set up David Curtin, who hit the post in the 44th minute, one of three brushes with the woodwork that their manager Joe Fortune lamented afterwards.

Imprecision on both sides was a problem. A poor wide here, a loose pass leading to turnover in possession there pockmarked both sides’ efforts but Kilmacud looked like getting home when Howard pushed them two ahead, 1-12 to 1-10, and shortly afterwards in the 56th minute, Lorcan McMullan raised his fist aloft to celebrate extending the lead to three - except it was judged wide.

“Maybe five minutes before the end there, I probably would have taken it,” said Ballyboden manager Joe Fortune afterwards. “I said it to the lads inside that I thought, on the day, we’d a lot of wides - we weren’t probably as structured as we normally are in the forwards. But, do you know, Jesus, what a battle!”

The replay will take place next Sunday at 3.30 despite the running of the Dublin City marathon and Kilmacud’s bank holiday football final against St Jude’s.

Another issue affected is the appointment of a new Dublin hurling manager, which will now be put off for another week, as Kilmacud manager Anthony Daly is one of the candidates and any decision would be disruptive for the replay preparations. The eventual winners will face the Westmeath champions a week later.