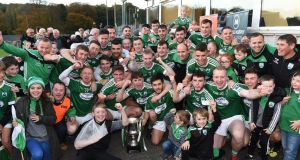 Odhran MacNiallais was the talisman for Gaoth Dobhair as they proved too good for Naomh Conaill in Sunday’s Donegal SFC final.

Kicking eight points, his return went a long way to ensuring the Dr Maguire Cup made its way across the brows of Errigal to Magheragallon for the first time since 2006.

Added to that, Sunday’s success was the club’s 15that the senior bracket - a record that sees them lead Letterkenny’s St Eunan’s by a single title.

“It means the world to me,” MacNiallais said afterwards. “This is why I used to kick the ball against the house and it’s something that I’ve always dreamed of. County titles are hard to win. You only get one shot and you have to have form every day you go out.

“Winning man of the match means nothing so long as we were lifting that trophy afterwards and thankfully we finally managed that today.”

In a first half of commendable economy for both teams, a wide wasn’t kicked until five minutes before the break. At the interval, it was Gaoth Dobhair who were 0-8 to 0-6 ahead with Kevin Cassidy, Eamon Collum, Daire Ó Baoill and Cian Mulligan all chipping in with supplementary scores to those of MacNiallais.

Naomh Conaill were reliant on the fine place-kicking of Ciaran Thompson and and Leo McLoone, and would’ve been satisfied with just a two-point deficit at that point.

However, the Glenties based side never got going in the third quarter and lost Marty Boyle to a black card that was added to a previous yellow, meaning red. His sparring partner in the second incident, Eamon McGee, escaped unpunished.

MacNiallais kept the scoreboard ticking over and it took Naomh Conaill until the 54th minute to open their second half account, courtesy of a John O’Malley score. They did manage to bundle a goal home in the fourth of seven minutes injury time for a goal, when Thompson got the final touch in a crowded square to reduce the arrears to four.

Their deficit, though, was too much. Late on, Gaoth Dobhair picked them off at will and that was enough to claim a long overdue victory for the Gaeltacht club.