Kieran McGeeney’s Armagh finally get over the line in Ulster

Down beaten after extra time, for first provincial win at the fifth time of asking 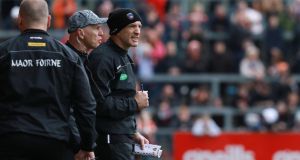 It may have took years in the making, but at last Armagh manager Kieran McGeeney has wrestled that most stubborn of monkeys off his back as they finally won an Ulster Championship match at the fifth time of asking as manager of his native county.

McGeeney didn’t perform media duties in the aftermath, instead leaving that to selector Jim McCorry, himself a former manager of Down but every inch the relieved Armagh man here.

“People talk about the win for the county, for themselves and for Kieran because he has put so much work in over the last number of years,” said McCorry.

“But the bottom line is we just needed to get a win and move forward in games where, if you take what we missed in the first half, we scored one from six frees in the first half. There could have been a bigger difference than that before the goal went in.”

As deliberate and suffocating as this game was expected to be, it flourished into something else entirely unexpected as four goals came as a result of the most basic and appealing tactics - getting the ball into the mixer.

Armagh’s good fortune was to be the one that landed the telling blow at the right time. Down had mounted an unlikely comeback in normal time, overcoming the loss of Caolan Mooney on the stroke of half-time to a red card after a high tackle on Aidan Nugent, to score 1-2 unanswered and bring it into extra-time.

Once they got there, with their numerical disadvantage restored with Ryan Mallon back on, they looked as if they would strike for home with three points in the first period of extra-time.

McGeeney however, still had one card left to play. Andrew Murnin hadn’t played a minute of county senior football in 2019 but because he exists in a purgatory of perpetual injury, isn’t as heralded as he might be. McGeeney rolled the dice and put him on the edge of the square for the second period of extra-time.

By that stage, Conor Poland was his direct marker, Down boss Paddy Tally burning through three different full backs. Charlie Vernon, back on after being taken off, sent in a ball and Murnin barely steadied himself before pivoting and lacing over in the 84th minute with his first touch.

His second touch will live long in the memory. Rian O’Neill drilled a delivery that entirely deceived Poland. Murnin could have caught it but instead decided to stun the flight with his fist, in the process placing it neatly into the top corner of Down’s substitute goalkeeper Mark Hynes’ net.

Three up at this stage, O’Neill added another from play to leave four in the margin.

Incredibly, the game had another twist. Paul Devlin sent in another rocket and this time the ball evaded everyone on the Armagh line and rattled the net.

The final play? Well, Armagh goalkeeper Blaine Hughes put all he had into it. Down’s Pat Havern jumped onto the breaking ball. Armagh players surrounded him. Referee Nolan could have whistled for a Down free. He adjudged Havern to have touched the ball on the ground.

Armagh were safe. Their first win over Down in Championship action in Newry in over 60 years. And the cheer that greeted it felt so.

Tally was left to bemoan the huge refereeing decision.

“It did have a massive factor in the game,” the Tyrone man said. “We were in a good position at that stage and Caolan was having an influence on it. But listen, you can’t blame the referee. It was a hard game to referee, tough and hard and you make the odd mistake but it does be a factor on the rest of the way the game pans out.”

Armagh now go on to meet Cavan in the Ulster semi-final on June 2nd.