Kieran Donaghy 10 years on: The second coming or a league midfielder

GAA Statistics: A decade on from winning Footballer of the Year, can Star defy the doubters again?

Kieran Donaghy was the cornerstone of Kerry’s revitalised league campaign but is the 2006 footballer of the year in the midst of his latest and greatest revival? Or will the hard ground of summer tell a different tale?

In late February, Donaghy was re-introduced to a struggling Kerry side for their round three trip to Newry – off the back of a heavy defeat to Dublin and a home loss against Roscommon. The Austin Stacks man was not named on the edge of the square though, the position from which he transformed the modern game a decade ago and won three All Stars. Instead, the 33-year-old was handed the number eight jersey.

Six subsequent wins saw Kerry into a first league final since 2009, boasting an average winning margin of eight points along the way. Nonetheless, lingering doubts remain over whether Donaghy has the overall athleticism or discipline to remain in midfield come the latter stages of the championship.

‘Star’ played his first 70 minutes of 2016 in the round six win over Monaghan, continuing the same long shift in wins over Cork and then Roscommon in the league semi-final and Dublin in the final. Prior to that he had been sent off after 50 minutes against Mayo and replaced on the hour mark against Donegal, having made way three minutes later in the win against Down.

The 6ft 5in Kerryman has clearly benefited from a pre-season on the basketball courts, named most valuable player as St Brendan’s Tralee captured the men’s national intermediate club championships in January.

In the three full games against Monaghan, Cork and Roscommon a hungry-looking Donaghy had an average of 44 involvements per game (see graphic above). And while much of these came in the first 10 minutes – 20 per cent in fact – Donaghy’s next most influential period was from the 60th minute to the final whistle, when he showcased not only his leadership skills but his elevated fitness levels.

Of course many of these involvements were aerial contests. But points, assists, handpasses, kick passes and turnovers still made up the guts of 63 per cent of his contributions. Moreover, 17 per cent of his aerial contests came in areas other than centre field, as the four-time All-Ireland winner contested ball from square to square, in attack and defence.

Against Monaghan, Roscommon and Dublin, Donaghy made regular excursions along the sideline up to the edge of the opposition square, where he remains a unique outlet in the full-forward position.

After the dismissal of Aidan O’Mahony against Dublin, Donaghy spent much of the second half stationed here, with the Kingdom reverting to type as the game ebbed away from them.

Yet his contribution stretches past the key action areas. Donaghy’s experience and revamped engine also allow him to get on a bountiful supply of ball as a midfielder in the wide channels where he is a swift and accurate link man. 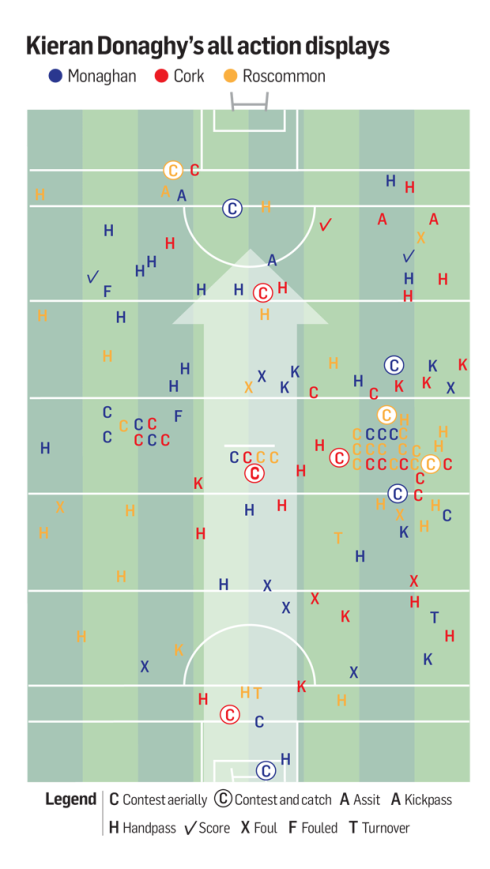 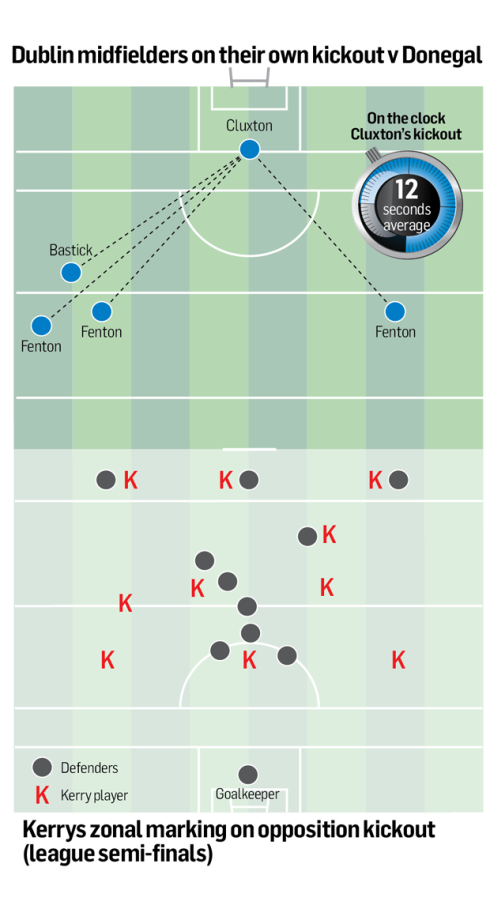 He scored three points during the three games prior to the final (he only managed two scores in all of last summer’s championship at full forward) and made three assists and three defensive turnovers. He again popped up for a point in the league final defeat. Yet much of what Star offers goes unnoticed: his organising, his leadership qualities and physical edge – he’s the big brother of the team, allowing the likes of David Moran greater freedom to express.

On the basis of the league, Donaghy has ticked most boxes for a modern midfielder – kickout option, scoring outlet, link man, extra defender – yet in a game of inches Jim Gavin and other rival managers are looking for every possible chink in the armour.

One of these is discipline. When he first came onto the scene Donaghy was a talented, rangy midfielder, but Darragh Ó Sé was the team’s fulcrum while the young pretender lacked the consistency, grind and cuteness to become a guaranteed starter at eight or nine. Those are characteristics that today he possesses in spades, yet persistent fouling can still be his undoing, particularly as the pace of play steps up a notch in the coming months.

Sent off in the 2006 Munster final where he lined out alongside Ó Sé at midfield, 10 years later – and back in the middle – he walked again against Mayo. He also picked up yellows against Cork, Roscommon and Dublin, somehow avoiding one against Monaghan. He was also in the thick of it against Donegal. His solidity and attrition have been key, but he will be frustrated to have conceded an average of four fouls per game in those three games. And five in the league final.

Another question mark floats around the opposition kickout. Teams will no doubt look to expose the bigger frame of Donaghy on the wings, empty his tank on the chase and avoid the 50:50 contests in which he thrives. Kerry will look to prevent this with their zonal marking system (see graphic above) for opposition kickouts – a tactic that worked a treat in the first half against Roscommon in Croke Park.

The Connacht side looked to gather in a cluster and break out into the open space. Kerry kept to their zones leaving little room to run into and ultimately forced the kickout down the gaping throats of Donaghy and Moran.

Come championship, though, we can expect sharper kickout routines from all of the top teams.

In Dublin’s league semi-final against Donegal, the average turnaround from the moment the ball sailed over Stephen Cluxton’s head or fell wide to his restart was just 12 seconds. And that in a game where Donegal did far better than most to delay him, forcing a long kickout on eight occasions. Still the Dublin captain clocked one turnaround at six seconds, showing his capabilities if needs be.

In the league decider Kerry forced Cluxton to look beyond short restarts for 56 per cent of his kickouts although a stretched Donaghy was under only one.

The Dublin midfield duo of Brian Fenton and Denis Bastick actually only contested (and won) four of their own kickouts against Donegal, with Donaghy’s direct opponent Bastick directly contesting none of his own kickouts in the final.

Yet with nearly every Dublin player on the move and available from the restart, Donaghy’s energy, awareness and speed off the blocks was tested – as they will be later in the summer. Even a struggle in this department though, where the most dynamic of midfielders are more often than not left red-faced against the reigning champions, shouldn’t discredit the rest of the work he’s sure to replicate in the Kingdom’s engine room.

Star caught an average of four balls per game cleanly in the semi-final and the last two rounds of league games – but offered so much more elsewhere. In fact, his insistence on calling for predictable, static kickouts directly on top of him may actually cause Kerry problems if the opposition look to bunch around him, and dominate breaks in Kerry’s half. Against Dublin, albeit on a day to forget for the Kerry restart, Donaghy’s sole clean catch from a kickout came from Cluxton’s end.

Against Roscommon he faced the multi-talented Niall Daly, a natural half back who had already managed three points from play against an ageing Donegal midfield, while Monaghan paired him against another dynamic opponent in Neil McAdam. He didn’t concede a score off either, nor did he against Bastick.

In the past big men have often been to the fore in league campaigns, powerful in the slog of winter football but targeted come summer.

To put Donaghy in that bracket though might be premature, as the qualities he has exemplified and the numbers he has chalked up suggest he will only be more suited to the tactical warfare of championship football.

Summer will bring a new dynamic and changes aplenty – and no doubt he will still see minutes in at 14 – but based on what we have seen in 2016 and what we know about this former underdog turned footballer of the year, a reinvented Kieran Donaghy will relish the chance to defy the doubters once more a decade on.

*Be sure to pick up your free GAA Championship Magazine in The Irish Times on Thursday - for your complete guide to the summer’s action including features such as this one from our expert team of GAA writers.

2 Darragh Ó Sé: Galway’s defeat at the death to Monaghan is shocking and unforgivable

3 Jon Rahm: ‘The hardest part was not being able to see my young son’

5 Love primed to tear them apart again at Royal Ascot

Deschamps and Pogba delighted with France’s opening win 07:11
France off to winning start; Rebranded Pro14 leaves Irish sides at a disadvantage 06:48
Jon Rahm: ‘The hardest part was not being able to see my young son’ 06:00
No room for a level playing field in rebranded rugby championship 06:00
Wales and Bale braced for hostile reception against Turkey 06:00
Crossword Get access to over 6,000 interactive crosswords