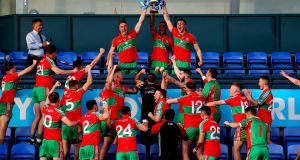 Front running for almost the entire match, Ballymun Kickhams gave a top-class performance in Sunday’s Dublin football final at Parnell Park – as good as anyone could remember from them. They dismantled the champions and finally put to bed the lingering charge of underachieving they have struggled to dismiss since winning the title eight frustrating years ago.

Even at the end with enough in hand to win several finals, they defended like jackals and continued to make Ballyboden’s life as uncomfortable as possible. The champions simply couldn’t find a foothold to get back in to a match that was slipping farther and farther away from them.

For the first quarter the contest flattered to deceive. With just seconds on the clock, the veteran Conal Keaney won a ball with muscular conviction and shot Ballyboden into the lead. The following two minutes would be the only time the champions were ahead all afternoon.

Keaney ended with three from play but the champions’ scores were so sporadic as to resemble punctuation marks, as Ballymun wrote the final chapter of what had been a great county championship.

The team’s many virtues were on display: focused defence, the ability to string together penetrating movement, especially the indefatigable James McCarthy, and hit the forwards with good ball, as with a couple of trademark advance marks – both of which were converted – and some exceptional finishing.

Dean Rock missed a free and a 45 but everything else was on target for a personal haul of 1-8 and was sharp as a tack from play. Just after sending the free wide in the 14th minute, he was on hand after Ballymun had turned over the resulting kick-out to pop the ball over.

A minute later, the non-stop running of Cameron McCormack provided Rock with another opportunity and he availed of it to open a three-point lead.

Having worked hard to try to limit the increasingly rampant opposition, Ballyboden were already watching it all slip away by the first water break at 0-4 to 0-7.

To be fair to the champions’ challenge, it had been undermined by circumstances. Injury hobbled key forward Collie Basquel and Mick Macauley for the semi-final and forced the withdrawal of Aran Waters and whereas all three started here, none was in the most dynamic form and Basquel, marked vigilantly by Leon Young, was replaced with 10 minutes to go.

Manager Anthony Rainbow didn’t make too big a deal of it but it was clear that his team wasn’t fully loaded for this, especially against opponents in such form.

“We had a couple of guys going in that probably hadn’t played football in two to three weeks. They were fit going into the game and, the quality of player that they are, we decided that we’d start with them. It’s the way football is. We just didn’t play well today and that was it. We’ve no complaints about it.”

Their goalkeeper, Mark McNamee, was a newcomer as suspension had cost regular goalkeeper Darragh Gogan his place. Unnerved by Ballymun’s high press on his short restarts, McNamee boomed them into the middle where they were picked off like autumn fruit.

He identified the second quarter as a major factor and so it was. Unaffected by the potential for shifting momentum after the water break, Ballymun picked up where they had left off and the repeated pistol crack of seven unanswered points – featuring more virtuoso shooting from Rock and also Fiach Andrews, who ended with four – meant the champions had effectively been deposed by half-time, trailing as they were 0-4 to 0-14.

The hopelessness of their situation appeared to distract the champions further and their shooting was haywire in the third quarter, as Ballymun pulled back and allowed them more territory but then hit on the counter,

Their bench had its usual impact and they outscored their opponents 1-3 to 0-2 in the closing quarter, Rock making no mistake from the penalty awarded when replacement Andrew McCaul was fouled in injury time.

Invited to comment on the display of Dillon Keating, brought in for the suspended Davy Byrne and shooting three from play, manager Brendan Hackett summed it all up truthfully.

“Most county finals are tight tense affairs that go nip and tuck or else you get one team that absolutely plays to the best of their ability. I think we played to the best of our abilities. Everybody was in the 8, 9 or 10 range. I can’t honestly stand here and say that anybody played poorly or had stage fright through nerves. I thought they were superb.”

1 Gerry Thornley: After 32 weeks the Six Nations is back up for grabs
2 Stockdale and Ringrose on board with expansive Irish game plan
3 Slaven Bilic hits out at €16.95 pay-per-view for West Brom’s draw with Burnley
4 Bennett girding his loins for impossibly unpredictable Vuelta
5 GAA expected to go ahead with championship under Level 5
Real news has value SUBSCRIBE