Doireann O’Sullivan and Mourneabbey taking nothing for granted 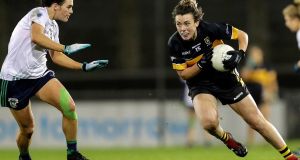 Doireann O’Sullivan in action for Mourneabbey against Foxrock Cabintteely: “We had worked so hard for it. It wasn’t just something we did in 2018 – we had worked so hard over all those years. It was half a decade’s work going into one All-Ireland final.” Photograph: Laszlo Geczo/Inpho

You are who you are until you change who you are. This time last year, Mourneabbey were the sob story to end all sob stories in the club championship.

They’d been to three All-Ireland finals in the previous four years and lost to three different teams. The one final they didn’t get to, they’d been beaten in the semi-final – by a different team again. It wasn’t as though they kept coming up short against the same supreme force. They were equal-opportunity supplicants.

After 25 minutes of last year’s All-Ireland final, they led Foxrock-Cabinteely by 1-11 to 0-3. In rotten winter conditions, they took 15 shots in the first half and racked up 13 scores. They penned the then four-in-a-row Leinster champions into their own half, into their own 45 really. It was only a half an hour of football but it changed who they were. For good.

“It’s only now looking back that we really appreciate it,” says star forward Doireann O’Sullivan.

“Shane Ronayne, our manager, had driven it into us. He was basically saying that we had given so much to football and that it was our turn to take back now. I think we went in with that attitude. We had a sports psychologist working with us as who is absolutely brilliant. We were sick of losing. We weren’t letting it happen again. That’s why we will look back on that as probably the best day of our sporting career. It’s definitely my favourite day playing football.”

Quite a statement coming from a five-time All-Ireland winner with Cork. But your people are your people.

Mourneabbey are an entirely self-made dynasty, a creation of their own imaginations. Back at the start of 2014, they’d never so much as been in a county final. The decade ends with them having put six together Cork titles in a row and six Munster crowns to go along with them.

At the heart of it are four O’Sullivan sisters, with Doireann and Ciara the go-to pillars of the side. Yet again this year, Doireann has missed more time than she would have liked through injury.

A back fracture was misdiagnosed first time around and only properly discovered after a second scan. It meant she missed a chunk of Cork’s summer and found herself chasing her tail when she did make it back. It took its toll, and then some.

“Playing sport is all any of us know,” she says.

“We get up in the morning, we eat properly, we go to the gym in the evening or we train. It’s all geared towards playing football at a high level and when that’s taken away from you, it is a culture shock. I don’t personally deal with it well. I don’t really think anybody does. I just shut myself off, I don’t talk to people about it – which probably isn’t ideal either.

“But it’s a lonely place. People can support you only so much. You’re lonely, you’re by yourself, you’re doing the rehab on your own, you’ve very little contact with the girls so you’re missing out on that side of it too.

“You feel like you’re falling behind. That’s the other side of it – you feel like you’re playing catch-up and you’re under pressure that way to get back on the starting 15. But there’s a lot at play there, a lot goes into the mix emotionally and mentally.

“I think the girls at this stage know to leave me alone. You don’t want anybody’s pity. The girls and management check up on you and check in with you and meet you for coffee and that’s all great, that social side of it is just as important as the playing and the training. But the pity party wears off after a while and you’re in it by yourself. It’s a long way back then.

“One thing that does scare me is thinking of the future and what we will do without sport when the time comes. When it’s taken away only for a short term in terms of injury, you can always see the light at the end of the tunnel. You know in your heart that you will get back. But I just don’t know what people do when they retire from sport. I will have an awful lot of my life to fill up when it happens.”

In the meantime, she has this.

Mourneabbey are strong favourites this evening in Limerick against Kilkerrin/Clonberne, the first Galway side to reach an All-Ireland final since 1990. On the face of it, the Cork team should win. O’Sullivan has seen enough bad days though to know the good ones don’t just land in your lap.

That might have been who they were in the past. Not any more.