Sideline Cut: Nobody outside the county should feel sorry for Mayo 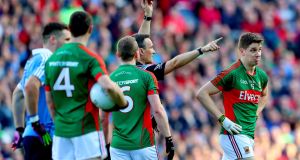 Lee Keegan just looked at the black card held aloft, registered his disagreement with a quick shrug and walked. There was no melodrama, no histrionics. Photograph: James Crombie/Inpho

Don’t look now. But there are Gaelic football games taking place right across the shires of Mayo this weekend.

There is literally no stopping them. The acute disappointment which spread from Mayo in both directions at tea-time last Saturday evening – spreading west across the Atlantic and travelling east over the countryside – was so widely and instantly felt that it almost overshadowed the significance of Dublin’s accomplishment.

Could the champions have wished for a better manner in which to achieve their back-to-back status?

To be taken to the absolute limits of their mental and physical endurance by a team that matches anything that has come before for physical and mental resilience; a team that only knows it is beaten when its beaten – and only half believes it then.

That’s who and what Dublin beat to become All-Ireland champions.

The managers of all aspiring counties – make that list as long or short as you choose – must have winced when last Saturday’s replay took up in tone and psycho-application where the drawn match left off. If Dublin were a team of formidable mental toughness before they met Mayo for the All-Ireland series, then what must they be like now?

There’s something about the personalities of these two teams that makes a Molotov cocktail of every championship game they play. The only thing that last Saturday’s All-Ireland final replay lacked was a sustained burst of quality scoring from both sides.

The completed attacks were staccato and a mood of high anxiety ruled the roost. But who needs pretty scores?

For pure tension and honesty and athletes visibly and unconsciously giving everything, it’s hard to imagine that there was any sport anywhere on earth to equal the feeling of being in Croke Park.

The pas-de-deux featuring Diarmuid Connolly and Lee Keegan was, all by itself, riveting. In the matter of a few games, the pair of them have established one of the most perfectly matched individual rivalries in Gaelic sports.

It was, of course, a shame for all neutrals that Keegan was forced to quit the field early for a challenge that was debatable at best. For many of us, the residual belief that October 1st would be the day for Mayo began to drain even as the Westport man ran towards the shadows. He is that important to Mayo.

Still, even the manner of his departure was befitting the duel of which he had been apart. Keegan just looked at the black card held aloft, registered his disagreement with a quick shrug and walked. There was no melodrama, no histrionic protests. He just left.

And even if Mayo could best a second half without Keegan, asking them to do so without Keegan and Donal Vaughan was too much. After all the debate about the Mayo forwards’ scoring, after Robbie Hennelly’s horribly bad luck, after Cillian O’Connor’s late free, after everything, it was the non-appearance of Vaughan for the second half that did for the green and red. You can’t win a Grand Prix with a faltering engine.

So the final has been lost, the wait goes on, the West seemed lonelier than ever last Saturday evening. But here is the thing: nobody, outside of the county itself, should feel sorry for Mayo. Because unless you are from Dublin or Kerry, the chances are you are deluding yourself.

No question, the new drama behind the old story of a Mayo All-Ireland final loss was mind-bendingly unexpected and cast the Mayo team in vivid rays of pathos and bathos. Even the Dublin players and supporters, through their delight, seemed to appreciate that the defeated team had been pitched into an exceptional, rarely-encountered realm of disappointment.

Yes, it was hard. Yes, it may be true that some of the most honest Mayo players to wear that jersey may not get that Celtic Cross. And yes, the sound of Luke Kelly lamenting The Auld Triangle seconds, mere seconds after the final whistle before Dublin even registered their splendid new reality and the Mayo players even had time to fall to their knees in despair seemed like a particularly exquisite form of torture.

The only way that moment could have been made more poignant and unbearable was if someone had been dispatched to the Croke Park car park to fetch Heartbreaking Classics: The Ultimate Compilation double-disc from the glove compartment of GAA president Aogán Ó Feargail’s car (hey, a Gael needs something to keep his spirits up on those lonely midnight drives through the interior after this medal ceremony or that wake) and played Harry Nielsen’s All By Myself across the stadium. Maybe that would have made the moment worse for Mayo supporters. But only that.

During the week, Keegan took it upon himself to address the elephant in the room through his Twitter account. The brief avowal to come back didn’t attempt to make light of the fact that this was a harrowing defeat for Mayo. And his message also carried a line about his having had ‘the honour and privilege of running into battle with legends that I will respect for life’.

Twitter is hardly the last bastion of sincerity but there was something right about the timing and wording of the salute. It helped to untangle the thoughts and hurts of anyone even remotely connected to Mayo football while also serving as probably the significant garland flung in Dublin’s direction this week.

But nothing surer: Mayo will be back. And remember this, even as you talk about poor Mayo this week. They will be back fully intent on – metaphorically – ripping the heart out of your own county team and breaking its spirit.

You can bet that in the heartland of Galway, hands are already being rubbed gleefully at the thought of getting Mayo into Salthill next summer.

But north of Shrule, that prospect is also warming fingertips. Whatever happens in that match, Mayo stand alongside Kerry and Dublin as near-certainties for quarter-final appearances in the seasons ahead.

One of the reasons for that is because there are football games taking place across Mayo this weekend.

And the supporters, the huddled masses who supposedly can’t take anymore and who have been driven demented by this quest, will turn up in their droves and the mood will be querulous and celebratory all at once.

And once the results come in, a new set of Gaelic football intrigues will present themselves. Robbie Hennelly, for instance, is tending net in Pat Rabbitte country this very day. Elsewhere, Cillian O’Connor will lace them up and finish the weekend with a big score to his name. Play football: that’s what they do.

Will Mayo win the Sam Maguire in 2017? Their chances are better than almost all other counties. There is a mean streak to this Mayo team and they are used to winning much, much more than they are losing. But who knows? Isn’t that the point of the thing?

It’s easy to sleep on another man’s wound. This autumn, once more, it is Mayo’s. It will pass.