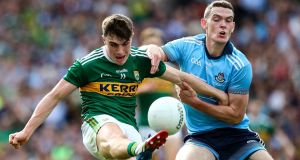 On Saturday evening in Croke Park, in what promises to be as atmospheric a final as ever played, history will either be made or memorably undone in the latest instalment of football’s greatest rivalry.

Despite the odds going into the first match being as long as Kerry have ever carried into a final, the best-informed projections were always going to favour a close-run contest – if for no other reason than that’s how Dublin’s finals have always played.

With the exception of last year, they have been a succession of one-score victories – one of them after the GAA’s most recent replay three years ago.

We’re not likely to know the teams until closer to the throw-in but, for what it’s worth, Kerry have named an unchanged line-up and Dublin may well do the same on Saturday lunchtime – although there is expected to be change on the bench, including the recall of Bernard Brogan.

The drift and nuances of the tactical battles are fascinating, but there is also a very basic reality. Dublin played their most dangerous opposition with only 14 men for more than 40 minutes.

How often do we hear about gaining centimetres or a 1 per cent improvement, and how that can radicalise performance? From the start Dublin will have an inbuilt improvement of nearly 7 per cent on the second half of the drawn match.

Another little remarked-on aspect is the champions’ sheer lack of competitive conditioning. They had to go back to the 2017 All-Ireland to find the last time they were challenged so ferociously in a sudden-death championship match. It was written all over the early stages when Kerry brought aggression and confrontation, and it showed in the turnovers Dublin conceded.

All of that will have been absorbed.

Yes, Kerry had carved out three prime goal chances before Jonny Cooper’s red card but, by the time he went, the team were five ahead.

There were, though, tangible problems in defence, and Jim Gavin’s remedial options haven’t been helped by injury issues besetting Cian O’Sullivan, John Small and, it is believed, Jonny Cooper.

The only firm likelihood is that Eoin Murchan will start; if he has last year’s form, his pace and intelligent marking will help, but a clean bill of health would greatly enhance the prospects of a less-cavalier defensive set-up, with a sweeper to patrol potential problems.

O’Sullivan is unlikely to start but, depending how the match develops, it’s a roll of the dice Gavin may have to make as well as having to devise more secure match-ups.

Kerry have been coming for a couple of years, building on unprecedented success at minor and the emergence of sensational forward talent. If David Clifford fluffed a few lines on the big stage a fortnight ago, he’ll hardly do so again, and Seán O’Shea was word-perfect.

Viewed dispassionately, the only question about Kerry is whether this team starts winning All-Irelands this weekend or in the years ahead.

Their defensive work was excellent the first day and if there was creaking in the full-back line, the timbers never splintered – they’d have taken a mere six-point concession from play in a heartbeat if offered it before the match. It wasn’t that all the battles had to be won – Con O’Callaghan won a lot off Tom O’Sullivan but didn’t get much of a supply, and the cover defence never let him get away.

It was centrefield where Dublin took the biggest hit. Apart from Brian Howard, who was terrific drifting in to create an outlet for Stephen Cluxton, the starting unit couldn’t get any traction.

The challengers won the sectoral battle but didn’t fully convert that advantage.

There is a lot of improvement in Dublin and they need to find it. They have the advantage of Cluxton’s extraordinary ability – park for a moment those breathtaking saves – to improvise his kick-outs under enormous pressure, but even the best keepers have to rely on their centrefield to win individual battles from time to time.

Brian Fenton must reassert himself in a fixture that has become a nagging intervention in his stellar career.

The biggest problem for Peter Keane and his management was the latitude afforded Jack McCaffrey, but talk of Stephen O’Brien moving over to him to put him on the back-foot at times sounds like whistling in the dark. McCaffrey’s defensive work was immense; the idea that he’s in some way a dashing dilettante at wing back looks particularly untrue at the moment.

Of equal importance to Kerry is that strict man-marking details are hard to combine with the sort of ambitious pressing they were doing on the restarts.

The pressure of the five-in-a-row was seen to have been adroitly handled by Jim Gavin in the lead-in to the original match, but on the day it was hard to know, as Dublin were ultimately so preoccupied with chasing the match that the enormity of any achievement never had a chance to play on their minds.

Many of the prescriptions for Kerry to win the final were based on getting to the final 10 minutes in lockstep with the champions and taking it from there. That ignores the one thread that runs through all Dublin’s victories: they are masters of the endgame. Even down to 14 and exhausted, they controlled the closing phase of the drawn match.

Players who hadn’t had the best of days, such as Kilkenny and Fenton, were still probing and not making mistakes.

It’s not difficult to believe that an era ends this weekend. Some great players will walk away from Croke Park with kitbags for the last time, but the belief here is that they will do so having made history: their last day but their day, nevertheless.