Kerry had the wherewithal, but missed too many chances against 14-man Dublin team 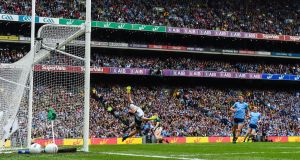 History will have to take a number and get in line. If there’s a five-in-a-row in Dublin, they’ll need to wait another fortnight to gather it in. All we can take from the first go-round is that there’s definitely the wherewithal in Kerry to stop it. That’s more than we knew on Sunday morning.

Kerry and Dublin danced their timeless two-step here and, in keeping with grand dancehall tradition, they sent everyone home sweating. Both sides would have been fairly happy to be told beforehand that they’d keep their free-scoring opposition to a relatively manageable 1-16. Failure to exceed that total will niggle at both sides in the run-up to the replay on Saturday week.

Yet again, a final came down to a Dean Rock free deep into injury-time. On this occasion, the degree of difficulty was off the scale: his standing foot was less than a metre inside the Cusack Stand sideline. It seemed slightly odd that he didn’t try it out of his hands, presumably stealing yards as he went. One way or the other, it slid by the near post, never threatening the space between them.

In these circumstances, the main question is who do you congratulate and who deserves your sympathies. Kerry were behind for all but seven minutes of this game and yet they felt marginally the more deserving winner. They missed three of their four goal chances across the afternoon and played the whole second half with a man advantage, Jonny Cooper having walked for a second yellow card just before the break. So do we commiserate with them for the chance gone up in smoke?

“I wouldn’t say it was an opportunity missed,” said Peter Keane afterwards, nixing the premise. “We haven’t been in an All-Ireland final since 2015. What are they going to get only experience out of the game? I said all year we are on a crash course and this a learning curve, this is only helping it.

“We could have won it, we could have lost it. I suppose Dublin probably feel the same. It’s like any draw, you take it and you go in and prepare for the next day.

“Did we think we had a chance coming here today? Of course we did. Two dogs in any race, one of the dogs might get a heart attack and the other lad would walk home. You’ve a chance every time you are up there.”

What of Dublin, so? They controlled long stretches of this game, leading by five points just short of half-time and again as the clock ticked past 55 minutes. Even down to 14 men, they had been composed and professional despite their headline acts not exactly singing their hearts out.

But for a bravura display from Jack McCaffrey – the game’s top scorer from play with 1-3 against his name by the end – they’d have been in trouble. But he did what he did and they were where they were. In that light, the consensus that Kerry are the ones who threw it away probably needs examining.

“Just disappointed with our performance,” said Jim Gavin afterwards. “That’s the overriding thought. The resilience the Dublin players showed to be on the ropes as such and to still keep moving and keep creating scoring chances, keep turning the ball over, that’s obviously the impressive piece. But overall in the expanse of the game, it’s just not good enough from the standards the players set for themselves, not what I set for them.

“I know when they reflect they’ll have a lot to say. All we’ve done today by getting a draw is give ourselves an opportunity to come out again here in 13 days and hopefully get a better performance, and if we can do that hopefully we’ll be there or thereabouts at the end of the game.

All credit to the Dublin players, they tackled and kept their discipline and turned Kerry over

“We played well in patches of the first half. We went five points up and they got a point relating from that sending-off. Then we pushed ahead and we went five up in the second. The guys, we know them well and they are mentally very strong, great mental reserve there – a resilient football team.

“A point down with 72 minutes on the clock, the perception might have been that the game has gone away from them. All credit to the Dublin players, they tackled and kept their discipline and turned Kerry over, and created opportunities for themselves and could have taken one or two more. We didn’t and that’s the disappointing thing, so we’ll have to reflect as best we can and move onto the next game.”

Onwards, then. For all the wise words about Dublin’s ability to stay in the moment, they showed here that history is heavy. Kerry head back to the southwest surely buoyed by the sense that they can press more weight down upon it again in a fortnight’s time.

4 Show me the medals: Ireland drops one place in Tokyo Olympic predictions