Atmosphere subdued in Smithfield as Dublin coronation does not materialise 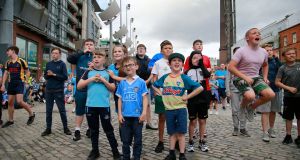 Smithfield Plaza has been the site of all Dublin’s homecomings in their drive for five.

Successive triumphant teams have returned here on Monday evenings after the All-Ireland finals to a place which is both a symbol of the regeneration of the city and the fortunes of the Gaelic football team.

Dublin City Council decided to open it a day early to allow fans watch what the RTÉ panellists called the biggest game in the county’s history – to go where no team had gone before and win the five-in-a-row.

It was supposed to be the place where those unfortunate enough not to get tickets would congregate to witness history being made, but by the time the throw-in came at 3.30pm, the plaza was barely half-full and it remained that way throughout the 70 minutes.

Presumably, the capacity was there for all the fans who were in Croke Park and would be turning up on Monday night.

A group of Italian tourists wandered into Smithfield Plaza and stayed for the game. They didn’t understand the rules of Gaelic football, but knew what sporting excitement looked like.

Even the sending off of Dublin full-back Johnny Cooper two minutes before half-time didn’t deter from the air of expectation.

Dublin had a four-point half-time lead and usually pull away from their opponents in the third quarter of the game. Not this time.

Rose to their feet

Most people watched the game sitting on the ground in front of the big screen. It was only in a crazy last 10 minutes that the crowd rose to their feet as Kerry doggedly refused to lie down.

Most were incredulous that Dublin could not put away this Kerry team who were rank outsiders, even playing with a man down.

Dean Rock’s last minute free that limped wide was watched with a stony silence and the crowd did not bother staying for the match analysis afterwards.

Within five minutes of the final whistle, the place was empty.

“The referee was a joke. That was never a red,” said one irate Dublin fan. Another said he felt he had been playing as he was so exhausted by the experience.

A few Kerry fans braved the arena. Sibéal O’Sullivan was one of those who hung around afterwards.

Few outside Kerry gave the team a chance. “I thought today was one of the best days. It was just spectacular. I nearly had a heart attack,” she said.

Outside Croke Park, Dublin fans pondered a game they were expected to win comfortably.

“We could have stolen it with the last kick of the game,”said Ronan Murphy. “I knew when Dean Rock put the ball on the ground that he would miss it. He doesn’t kick it well off the ground.

“I don’t know why Stephen Cluxton didn’t take it. He turned his back on it like he didn’t want to take it.”

There will be other days.