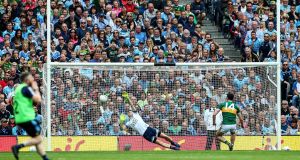 David Clifford was already causing Jonny Cooper enough trouble in the first 10 minutes, should have had him for three points only to twice shoot wide, before nailing his third shot. Cooper then gave referee David Gough little choice but to award Kerry the penalty after he grabbed hold of Clifford without any effort to play the ball, setting up the placed ball for Paul Geaney after 12 minutes.

This could have put Kerry in front, only for Stephen Cluxton to make yet another super intervention: Geaney may regret not striking lower, but Cluxton still did brilliantly in choosing to go to his right, inching off the line in the process, and using his strong left hand to make the block even as gravity tried to pull him away. Super stop, sent out for the 45 which Seán O’Shea converted to level the game, but an early let off for Dublin nonetheless.

The game was 17 minutes old when Jonny Cooper was guilty of another foul on David Clifford, which resulted in his first yellow card, and from the resulting free Sean O’Shea did what he did faultlessly all afternoon and kicked the ball clean through the uprights. With that Kerry were in front for the first time, 0-5 to 0-4. Only from the resulting kick-out Dublin did what they so often do best and hit right back.

Stephen Cluxton’s kick-out drifted towards the Hogan Stand end and was wonderfully won by Brian Howard, the Raheny man already having the best final of his career. With that the ball was promptly passed off to Ciaran Kilkenny and in turn to Niall Scully, who immediately found Jack McCaffrey making his blistering run towards goal. Still McCaffrey had to finish, his shot giving Shane Ryan little chance of stopping it. It took considerably less than 10 seconds for Dublin to work the ball down the length of field and with that goal they were back in front, 1-4 to 0-5, that advantage proving early on certainly proving crucial by the end.

3. The redeploying of James McCarthy

Dublin went into the break four points up, 1-9 to 0-8, but would be a man short for the second half. Could they survive? Jonny Cooper can have no excuses for his second yellow card, and nor it seemed would manager Jim Gavin. “No,” he answered, when asking if he should have moved Cooper off of David Clifford, given what was clearly happening before the eyes.

Still Kerry will be left feeling they couldn’t always make the extra man count, with James McCarthy dropped back to help make sure of that. It did mean sacrificing McCarthy’s usual influence out the field, but any team that survives an All-Ireland final playing the entire second half a man down can only be thankful for that.

4. The fingertips of Stephen Cluxton

Coming out in the second, four points down but a man up, Kerry tore into Dublin as if the winning of the game was suddenly in their grasp, as it may well have been. Seán O’Shea fired over his second 45 of the game with yet more audacity shortly after the restart to make it a one-goal game, 1-9 to Kerry’s 0-9.

Then on 40 minutes Paul Murphy found himself running clean through at the Dublin goal with only one thing on his mind. The direction was perfect, the height possibly less so, and even if it will be never be entirely clear whether or not Cluxton’s fingertips made the difference, it rattled clean off the cross bar and out for another 45, which O’Shea also converted, but Dublin relief all round.

5. The late coolness of Dean Rock

Kerry will feel justifiably proud and content to have limited the Dublin forwards to a single point from play in the second half, with only Jack Caffrey adding the rest from play, his three second-half points as searing and well executed as the next. Still that one other point will go down as the most crucial – as Dublin still trailed Kerry by a point, 1-16 to 1-15, as the clocked spilled into the seven minutes of added time. Seven minutes to save the drive for five.

Cormac Costello briefly appeared to have provided it, only for that shot to be ruled wide by Hawk-Eye; Diarmuid Connolly also tried a pot shot from out the 45 but that went wide too. Then Eoin Murchan, freshly sprung from the bench and injecting some fresh pace too, found Dean Rock exactly where he needed to be, running into a scoring position. Rock didn’t have time to think, only to shoot, which he did brilliantly, and with that levelled it up again in the 74th minute. His final free, in the 77th minute, as difficult as they come, drifted wide of the Davin Stand but Rock has played his part for the ages yet. To be continued on Saturday week.