An All-Ireland football final for the ages

Exquisite drama but nobody is any the wiser still 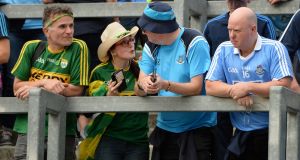 The lava flows on. After the hype and the forecasts and the thousands of old Kerry and Dublin yarns, the old rivals got together to produce an All-Ireland final that turned molten early on.

And it isn’t over yet. It never is between these two.

In the 77th minute, Dean Rock stood in front of the Cusack Stand and took a few yogic breaths as he prepared to strike the free that would deliver Dublin their fifth All-Ireland final in a row.

In Kingdom country, the fans were hiding behind their sofas by now. This final and the occasion had become too much. Kerry. Dublin. Five-in-a-row. 1982. Could all of this really be settled on the last kick of the championship?

Jim Gavin’s team had been hot favourites to extend their grip on the Sam Maguire and become the first county to host the famous cup for five successive winters.

Only Kerry had ever threatened to do that until Offaly and Séamus Darby bombarded their dreams back in 1982, when Ireland was a different country. That old story and history was buzzing around Croke Park yesterday.

All summer, the occasion had demanded that Kerry should stand between Dublin and a magical conclusion to Dublin’s imperious years.

And right on cue, Peter Keane’s young, precocious team showed up. They teetered here, falling five points behind in both the first and second half. But by then Dublin had lost Jonny Cooper, their fullback, to a second yellow card and were keeping their noses ahead on guts and instinct.

The Hill had fallen into a lull and after five years of unending brilliance, once Killian Spillane broke free to fire Kerry’s first goal, it felt as if their heroes might just fall short a mere 15 minutes from the finish line.

Suddenly, Dublin, the most feared team of the modern age, looked hunted. They looked, for the first time, vulnerable.

And yet. In the very last play, with the country riveted, Dublin had somehow found a way to recover after falling behind, to draw level and then go try to win the thing.

Rock had already won the All-Ireland for Dublin with a last-minute free in 2017. He had fired 0-10 in this game. Who would have bet against him? Maybe it was a gust of wind or a puff of Kerry black magic. But his shot tailed wide.

“The feeling in the dressing room – disappointment,” agreed Kerry manager Peter Keane. “We could have won it. We could have lost it.”

Eighty thousand people poured out of the stadium, reeling and drained. They’d witnessed an All-Ireland football final for the ages.