Galway hold off late Dublin rally to be crowned champions 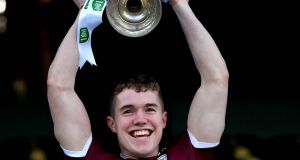 Galway’s Jack Glynn after victory in the under-20 All-Ireland final. Photograph: Ryan Byrne/Inpho

A couple of months ago the prospect of shackling Dublin’s best forward on All-Ireland final day, captaining Galway to EirGrid U-20 success and delivering an impromptu speech seemed like a pipe dream for Jack Glynn.

Between the Covid-19 cloud that descended upon the group ahead of their semi-final against Kerry and the lockdown that followed, Glynn said he could not see a lot to be a positive about.

Two months on Galway are champions, claiming the county’s first title at the U-20/U-21 grade since 2013, and the corner-back said it was all the sweeter after going through such a difficult period.

The Connacht champions were without several key players for their win over Kerry, and the return of those players for Saturday’s final, allied to Glynn’s excellent man-marking job on Dublin dangerman Ciaran Archer, helped secure the title.

Even at that it was a close contest with Galway relying on the six-point cushion afforded by top scorer Tomo Culhane’s 37th minute goal as resurgent Dublin came good and reduced the margin to just one late on.

Afterwards Glynn excused himself for not having a speech prepared when he revealed he had been stuck in college assignments all week.

“It was hard to see any light at the end of the tunnel back in October,” said Glynn. “Different lads were coming down with [Covid] and you were afraid that everyone would get it at some stage, that we’d have to forfeit the game or we just wouldn’t have the lads to play. It looked impossible.”

The final win was particularly satisfying too for those Galway players who had experienced minor final defeats in 2018 and 2019, also under current U-20 manager Donal O Fatharta.

Culhane was a beaten minor finalist in 2019, when he scored 0-10 against Cork, and top scored with 1-6 on his return to Croke Park to bury some of those memories.

“A couple of lads had been here and lost All-Irelands so everyone’s focus was direct. Lads had experienced pain here and didn’t want to feel it again,” said Glynn, who played down his own excellence.

“The lads in the middle of the field made my job easier because they put on serious pressure on the lads kicking in the balls. When it’s coming in as a 50-50 ball then the back should always win it. I just was lucky enough to be able to do that.”

Galway pressed Dublin hard for two-thirds of the game, led 0-8 to 0-5 at half time, and opened up a six-point lead after Culhane’s goal when he was expertly played in by Galway senior Matthew Tierney following a lengthy solo run.

Galway’s energy levels dipped, though, and they were outscored by 0-5 to 0-1 in the run-in as Dublin came within a whisker of drawing level. Mark Lavin and Lorcan O’Dell struck 0-5 between them as Dublin, beaten in last year’s final by Cork, got the deficit down to a single point on two separate occasions.

Tierney’s 59th minute point from a free ultimately proved to be the winning score for Galway.

“That’s two defeats in finals in a row for us, it’s hard,” said Dublin manager Tom Gray. “There’s no point saying it’s not.

“But there’s lots of evidence to suggest that players who suffer disappointment at this stage in their careers, their teenage years, tend to be bigger performers when they get older.”