GAA to announce details of 2021 season 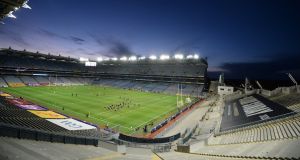 Football’s Tier 2 Tailteann Cup will take place in 2021 having been shelved this year because of the abbreviated season. Photograph: Dara Mac Donaill

The GAA is hoping to announce in the coming days details of the 2021 season. Next year will start in February with the National Football League organised on a regional basis but within the divisional structure.

On Friday evening, Central Council met in remote session to rubber-stamp the arrangements for next year.

It is expected that the GAA will unveil the divisional groups, which are as published last October by The Irish Times:

Division Four South: Carlow, Wexford, Waterford, London (if they are able to compete).

The Allianz Hurling League will be organised on the same basis as this year.

The championship will follow, with All-Ireland finals scheduled for July. There will be All-Ireland qualifiers to allow for second chances, as opposed to this year’s purely knock-out format, used for the first time in 20 years.

Football’s Tier 2 Tailteann Cup will also take place having been shelved this year because of the abbreviated season.

Proposals to operate the split season again but with the intercounty matches at the start of the year had already been proposed but deferred pending further consideration by the GAA’s financial arm, concerned at the prospect of a second year with no gate receipts.

There is no real option, however, as club activities will not be permitted until public health restrictions reach Level 2, which is not considered likely by February.

The Club Players Association released a statement on Friday supporting the sequencing of the new season.