James Horan’s side undone by goals, as Dublin make the closing phases count 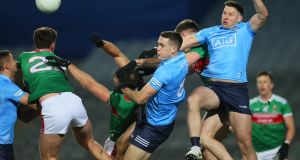 Dublin and Mayo players battle for the ball in the All-Ireland SFC final at Croke Park on Saturday. Photograph: James Crombie/Inpho

In the chill of midwinter, the strangeness of the season intensified by the emptiness of the stadium, Dublin’s footballers extended their historic grip on the championship.

The only familiarity about the occasion was the outcome and the presence of their eternal foils Mayo, but the circumstances of this wretched year were in a way made for serial winners, whose focus has long been trained on themselves and their perennial battle to play to their own standards.

Not for the first time in a final, Dublin didn’t emulate the highest of those standards but, in typical fashion, they found enough along the way to be poised when the final quarter arrived, and they were able to set about the one thing they do better than anyone else: manage, almost micromanage, the closing phases of a match in such a way that their success is assured.

It’s not to patronise Mayo to circle the attainments of James Horan’s side. Two priority areas were getting the match-ups right and limiting damage on the re-starts, which have been challenging for the team this championship.

O’Callaghan, though, has the pulse of an assassin, never panicking when things aren’t going his way, and lethal when the chances present. He will be disappointed with some of his plays, especially when fumbling possession in the second half when a run had again given him clear sight of goal, but he was a constant menace.

The other strike forwards were similarly negated. Chris Barrett kept Dean Rock at bay and only productive from frees for most of the match, whereas Ciarán Kilkenny was frustrated by Paddy Durcan.

The kick-outs were a revelation. David Clarke, much criticised for this element of his goalkeeping game, was on the button for Mayo and the champions’ five-star centrefield struggled to harvest anything. By half-time the mind-boggling statistic was that Mayo had won 17 of the 23 re-starts.

It wasn’t simply aerial domination, although the fielding was frequently very good, but they were also sharp and acquisitive on any breaking ball. As a result Dublin had nothing like the possession they had been expected to secure.

All well and good, but, at the break, Dublin were heading off two points ahead despite all that had gone right for their opponents. There were old-school tunnel shenanigans as the players trooped off, but the smart money would have to rate any further action on this as likely as the pubs being open in the new year.

Essentially Mayo were undone by goals. They never looked likely to create or score one, whereas Dublin got two.

James McCarthy, who put in another superb big-day display, had pilfered the throw-in and taken off. Fatally, no one chose – or was able – to follow and he deftly placed a foot pass into Niall Scully, collected the 1-2 and, having drawn the alarmed cover, popped the ball up for Dean Rock to palm into the net, just over the outstretched hands of Clarke.

So, to all the imaginative setbacks Mayo have suffered in All-Irelands could be added concession of the fastest goal in the history of finals.

The Connacht champions responded and swiftly wiped out the three-point deficit, signalling that after the somewhat bloodless victory in the 2019 semi-final, Dublin wouldn’t be getting this easily.

At one point it was noticed that Stephen Coen had switched onto Kilkenny, with Durcan dropping to full back – an odd switch given how well the Castlebar man had originally been doing. It turned out to be a leg injury that Durcan was trying to run and he had to be replaced at half-time.

The loss of the team’s best defender had been slightly offset by their opponents being down to 14 after a harsh black card for Robbie McDaid, who didn’t appear to have moved when Kevin McLoughlin bounced off him just before half-time.

Mayo could later counter-complain that a mistimed shoulder by Michael Fitzsimons on Lee Keegan in the 46th minute went entirely unpunished when at the very least an easy free in should have resulted.

They had hit the front for the only time in the final, with two Cillian O’Connor marks, exploiting David Byrne’s discomfort in the air, being converted in quick succession. For good measure Mullin confiscated Cluxton’s kick-out with another mark.

The good vibes lasted less than two minutes. O’Callaghan’s threat materialised with a goal he conceived and executed: side-stepping Diarmuid O’Connor in front of goal, using the unmarked Scully as a 1-2 and pointing urgently into the square. The floated hand pass was good but the Cuala forward still had work to do.

His instinct to punch the ball into the net did the trick. It wasn’t a knock-out blow but it wiped out the brief lead and Mayo had taken a heavy shot to the head.

Dublin manager Dessie Farrell said afterwards that he felt the way the team handled McDaid’s 10 minutes in the sin bin had been crucial, but central to that was the arrival of Brian Howard for the second half.

His sparing deployment has been a mystery of the new management’s policy, but he transformed a centrefield where Brian Fenton had been in difficulty between Mayo’s swarming attentions in the middle and the bespoke marking of Diarmuid O’Connor, with Conor Loftus switching to the wing.

Howard kicked a point, took a couple of his usual breathtaking catches and, suitably encouraged, Fenton too achieved lift-off. Kilkenny, freed from Durcan, was now his recognisable self and added two points to get his FOTY prospects back on course.

Cillian O’Connor levelled the match in the 50th minute but, over the closing 20, Dublin out-scored their opponents 0-6 to 0-1.

The limits of Mayo’s admirable challenge were on display, chiefly their lack of attacking edge. Newcomer Ryan O’Donoghue had a good first half, belying his inexperience with two points, but he and O’Connor were the only starting forwards to score, as Eoin Murchan did a good job on another of Mayo’s rookies Tommy Conroy.

Then there was the quality of the bench. Howard was joined by another current All Star, Paul Mannion, who nailed a tricky free as soon as he came on. Mayo couldn’t get anything of that transformative impact from their replacements.

Dublin are champions. The year ends as it began.