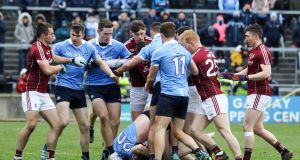 A scuffle breaks out on the pitch between Galway and Dublin players. Photograph: Lorraine O’Sullivan/Inpho

A flavour of ‘83 about this wild and wildly entertaining league contest between the two teams who will, after everything, contest the spring final in a fortnight’s time.

Another hugely encouraging step for Kevin Walsh’s young Galway team, who almost won, then almost lost and finally, in the 75th minute, rescued a memorable draw in front of a riveted crowd of 10,000 people on a day closer in temperature and vibe to Helsinki than Salthill. Thankfully, there was more than enough brandy in the match.

By the time Johnny Heaney made a brave gamble forward to invite a quick free on the fifty metre line from Barry McHugh, 79 minutes had gone. McHugh’s place-ball striking had been immaculate in the first half but against a stiff seaside breeze, a short ball was the smart option. Heaney drove a point with his weaker foot to make it 0-13 a piece. By then, referee Joe McQuillan had already issued 10 cards; seven yellow, a red for Eoghan O’Gara and blacks for Dean Rock and Galway’s Sean Andy O’Ceallaigh among the yellows in a match that graduated from confrontational to incendiary.

With a 0-12 to 0-9 lead built upon efficient attacking a hugely disciplined defensive piece, Galway came preciously close to a famous win here. They became penned in as Dublin pressed up with characteristic boldness and made their experience count: Galway coughed up three avoidable frees within easy scoring range and could do nothing about a brilliant point from Ciarán Kilkenny, who was splendid for Dublin. But Galway’s fearlessness in the face of this challenge carried through and they had both the composure and cussedness to engineer that late score.

“It’s a game we feel we should have won,” said Kevin Walsh.

“Maybe there was a little bit of learning for ourselves in the fact that they were under pressure. That’s what Dublin do. There’s one or two things there that probably we can improve on which is good. Every day you’re playing, if you’re not learning, you’re in trouble. Sometimes you learn a lot more when people put pressure on. We would have said a hundred times which do you want, a big challenge or knowing you’re going off to have an easy game. And I think the answer from me always would be to be challenged. They challenged us and we’ll learn from that.”

Of greater significance was the fact that Galway challenged Dublin, who were without their captain Stephen Cluxton, in a way no team has all spring. Walsh elected not to start Damien Comer and didn’t play Gareth Bradshaw, who has been in terrific form. Still, with that big breeze, they played some fine football, with Peter Cooke floating two sumptuous first half scores and McHugh punishing every Dublin indiscretion with his place kicking.

When Ciarán Duggan honed in on a loose Dublin pass to play Gary O’Donnell through for another terrific point, Galway had an 0-8 to 0-3 lead after 25 minutes and also created two great goal chances. The locals were delighted. Dublin showed the same infinite patience against Galway’s disciplined, drift defence but found it stickier and more aggressive than most: but for Kilkenny’s three points from play, they struggled to make any impression.

“I thought we were penetrating them in the first half, just weren’t taking the scores,” suggested Jim Gavin.

“Listen, when a team plays, of 14 outfield players, with 13 players behind the ball, for any team it’s going to be a challenge. But I thought our boys embraced that challenge and responded to it well. Galway didn’t change their system in the second half; if anything it got a bit more tight down there. They compressed the space. But I thought our guys responded really well to that. It’s just our hand-passing and kick-passing . . . that needs to certainly improve.”

For all would-be contenders, Galway’s patience was a lesson worth absorbing: they were satisfied to allow Dublin kick-ball to their hearts content along the fifty and retained huge concentration in tracking the city team’s strike runners- James McCarthy, Michael Dara MacAuley, Brian Fenton (in the second half) and Jonny Cooper. Galway didn’t manage to break as hard or as often as they have done all league but it became clear by 10 minutes after half time that the Dubs were in a scrap.

And that’s what the game became. When Dublin appeared to have completed their usual nerveless late rush to victory, with Cormac Costello clipping a free in the 75th minute, it was significant that they immediately smothered all avenues and men in scenes redolent of the All-Ireland final. By then, the game had become fractious and reckless and some four minutes were added past the allotted five of injury time.

“Guys are trying to fight their own corner. I don’t think there were too many belts but there was a bit of cynical stuff going on. Probably didn’t suit us at the time given how we were positioned. But either way, it’s football.”

It was that and brilliant value for the supporters: it was hard not to notice how much joy the vocal Dublin crowd gleaned from spurring their team on from such a tough place. By the final whistle, Damien Comer and Philly McMahon, both wearing #20, were still caught up in the moment, pushing and shoving and saying hello/goodbye as the crowd spilled onto the field. Now that could be the beginning of a beautiful friendship.