GAA Statistics: The AFL's 'Irish Experiment' through the years

Irish players are collectively performing better than ever in the AFL 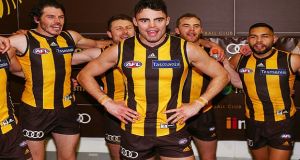 Since Paul Earley went to Melbourne in 1983 Irish players have departed for the AFL from 22 different counties, but there’s never been more of them down under than in the past two seasons. And collectively, they are performing better than ever.

James Madden will become the 53rd Irish player to come through the AFL system, having signed with the Brisbane Lions last month.

After setting a new AFL Draft Combine (final trials) 20-metre sprint record last year he’ll become the sixth player from the capital to make the switch to the small oval ball. Only Cork have had as many, Kerry have lost five players, there’s been four apiece from Kildare, Laois and Derry, three each from Down and Mayo, and two from Roscommon, Tyrone, Louth and Westmeath.

Prior to 2008, the highest number of Irish players in one year in Australia was seven (in 1990), and since then the lowest has been six in 2014. The years 1999 and 2000 have been the only ones since Earley’s arrival that no Irish player has been involved and there’s been an average of five players over there per season.

In total, only 24 Irish players have gone on to make appearances in the AFL though -  28 have not. The lucky 24 have made a total of 1,272 appearances, making an average 24 appearances per player. Nine players have played more matches than the average and they make up 92 per cent of the overall appearances. Sean Wright, Jim Stynes, Tadhg Kennelly, Pearce Hanley and Zach Tuohy make up 73 per cent.

On average, one player has been recruited per year since 1983 – with a record of six coming over in 2015 – but in 1984, 1987, 1988, and from 1992 to 2000, no players were recruited. That spell, which ended with Kennelly leaving the Kingdom for Sydney, followed a run of five players who all went home without making an appearance. In fact, Kennelly and Setanta Ó hAilpin were the only two in a stretch of 12 recruitments to progress and make a senior appearance.

Irish players (not including those who still remain with clubs) stay in the AFL system, on average, for a little over two years. Twenty-one players have stayed beyond that and only six for more than five years.

The late Stynes won the Brownlow medal – awarded by the AFL to the “best and fairest” player during the regular season – in 1991, and Kennelly became the first Irish-born winner of the AFL Premiership in 2005. However, the player with the best seasons-to-appearances ratio is Down’s Marty Clarke, who played 73 games over three years (average of 24 per season). Next is Laois native Tuohy, with 168 appearances in eight years, edging Stynes who averaged 20 appearances per season (over 13 years) and Kennelly who averaged 18.

This season Conor Nash became only the 16th Irish player to score an AFL goal. Stynes, Ó hAilpin, Mayo man Hanley and Tuohy have accounted for 68 per cent of the 476 goals scored overall. Aside from Earley, who scored one goal in his one appearance, Ó hAilpin has the best scoring ratio with a goal in 93 per cent of his 88 matches. Next best was Kerry’s Tommy Walsh with three goals in five matches, while Stynes scored in 49 per cent of his 264 matches. He scored 130 in all. Hanley has the most of the current Irish players with 59.

Since Tommy Walsh arrived in Australia in 2010, 14 of the 23 Irish players to make the trip over have like him returned home. Not including Ray Connellan, who only came back to Westmeath last month, five of those 13 returning Irish players have yet to start an intercounty championship match since making their GAA comebacks. Nevertheless, 10 players in 36 years have returned to Ireland and subsequently won at least one All Star.

Madden hails from the same Ballyboden St Enda’s club as Stynes and the 18-year-old arrives at an exciting time for the Irish contingent in Australia. From the 10 players already over there (Connellan and Cian Hanley both departed during the year), they have a combined average of 43 appearances and 13 goals.

Nash, a former Meath minor and Leinster academy rugby player,  told Off the Ball AM last month that efforts to create a mini Irish community has been key to this. Despite lads playing for opposing teams, “there’s a lot of us here in Melbourne so we do meet up and if you were feeling homesick a bit, you’d just flick one of the lads a text and meet up to catch up. We have a great bunch here at the moment, and anytime one of us makes the debut it’s thrown into the WhatsApp group. ‘There’s another one, keep them coming’ – Tadgh Kennelly always sends that one in. And we just want to see as many Irish boys out there as we can each week, it really is a massive thing for all of us.”

The “Irish experiment” has largely been about the outstanding progression of the few making up for the disappointments of the many, but these lads seem intent on that changing. And so far so good.

*All the Irish players that have come through the AFL system and found themselves on a senior playing list (bolded means they are currently attached to a club):

The 2018 season is still at the preliminary finals stage, although the Irish interest in the competition ended after the previous round.