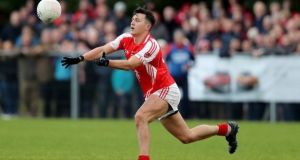 TG4’s Underdogs series follows the journey of some of the best club players from around the country as they prepare to take on a county team. To be eligible players (over 18) must have never previously played intercounty senior championship football. Episode three is at 9.30pm on Thursday . . .

After just four days as an Underdogs squad our ability to work as a team was put to the test during a gruelling camp at the Curragh.

It certainly wasn’t for the faint-hearted. Since the first trials we’d only spent six days together overall, first in competing with one another for places and then in Athlone for testing. At this early stage, while you’d know everybody, even some of the lads’ names still weren’t rolling off the tongue.

Personally I’d already experienced an army camp at the Curragh barracks with the Roscommon minor team about seven years previously. The late Dermot Early always made teams from his native county very welcome and for me the great man sums up the characteristics we’d need to thrive, rather than survive, over the three days. The former Irish Defence Forces Chief of Staff embodied honesty, hard work and he always embraced challenges.

That minor team were a group who’d been tight since under-14 development squads and there were several lads from the same club and schools involved. The Underdogs arrived as a bunch of players from different parts of the country who for the large part had never even seen one another before the trials.

So, heading into the Curragh I had been telling all the lads, make sure to listen to every detail in the instructions, body language is key, as is positive communication and be prepared for punishments. Easier said than done, they’ll get you one way or another and within a few hours of arriving I found myself getting an earful for taking off my long sleeved black top under my training jersey during a break. We’d been given a dress code on arrival but it was roasting.

From the off they’d taken our bags and phones, and we were told we’d have to work together for anything we’d be getting. That went for water, showers, food, and beds. If you want to call what we tried to fold out and sleep on beds.

We had to complete the tasks presented as a team to earn the required credits, then as a team decide how best to spend them. Which isn’t easy. For example, if you haven’t earned your bags back how can you shower with no towel and change of clothes? There’s no point just spending on food as unless you’re clean and presentable you can’t enter the canteen. With no phones there’s no way of knowing the evening’s football training schedule.

Even thinking about it now has me back on edge, worrying about which way my metal rifle is facing and if I’ve the correct gear on.

The mental demands were the toughest but it was physically exhausting at times too - dragging a tire up Braveheart Hill in particular required every bit of strength, as well as total teamwork.

With a car driving up ahead of us and a cameraman hanging out back, it was certainly a unique experience. But not a bit of it blurred the focus, we were far too tired to care.

Playing football with a section of the pitch cut off for a camera becomes pretty normal after a short while. It’s expensive gear to be hitting with the ball, the crew often warn us, but even they’ve begun to relax into the environment.

Being filmed seconds after finishing a lung busting drill, at half-time in a match, or the minute you wake up in the morning - at some point it all just became the norm and that point probably arrived during the chaos of this camp.

The secret to our recovery? Uddermint

Two men who were especially tested over the three days were Graham Bedford and Blake Forkan. Two of our three very talented goalkeepers in the squad - Graham has played for Dublin at all grades bar senior and Blake played for the Mayo juniors - they were our captains for the camp.

Every instruction and question had to go through them to us, and even though they didn’t have to do most of the physical work, their roles were definitely the most unenviable. You felt for them, running about the place trying to remember everything.

Aside from the army stuff, we also met a famous selector from the 2004 victorious Underdogs team, and we somehow managed to get the bodies in shape to take on the army team at the end of it all.

The secret to our recovery? Uddermint. Tyrone man Ronan O’Neill has discovered that the cream used by farmers to soothe cows’ udders at calving time is just as effective when applied to tired human legs.

The whole squad used it, and even the Dubs and the more cynical older heads are believers now. The science behind uddermint? Who knows. It has a strong mint smell and you’d want to keep it away from sensitive areas, but it helped get us through three very demanding days which each also ended in a football session.

After all was said and done it’s fair to say we did become a team. And we’d need to be, to take on a talented army team who had been preparing very differently, and certainly beyond that.

TV View: No Beano on the couch as Dennis proves a right old menace 19:06
Newcastle feel the heat as Arsenal get some of their old mojo back 19:18
Clare pull well clear of Laois to keep unbeaten run intact 17:51
Offaly pick up first league win 17:44
Wexford best the weather and Kilkenny on a mad day to be hurling 17:36
Crossword Get access to over 6,000 interactive crosswords