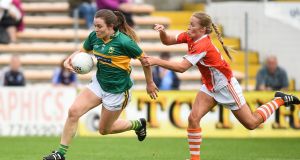 The Kingdom will face Dublin in a mouth-watering clash on August 26th, after claiming a six-point victory over Armagh in Saturday evening’s quarter-final at Nowlan Park, Kilkenny.

Kerry were much the better side after the break - and Armagh suffered a massive blow with 11 minutes left when Niamh Marley was sin-binned.

While 16-year-old O’Donoghue caught the eye for Kerry, Aimee Mackin was superb for Armagh, particularly in the first half.

The Shane O’Neills player went into battle nursing a hand injury but still finished with 2-4, including 2-3 in the opening half.

O’Donoghue was a late inclusion in the Kerry starting line-up and the Beaufort star, who won two All-Ireland U-16 medals under Shine’s guidance, more than justified that call-up.

She opened the scoring with a point in the first minute and Kerry added two more to lead by 0-3 to 0-0 within eight minutes.

They also had goalkeeper Laura Fitzgerald to thank for a brilliant stop from Mackin - while the Na Gaeil player would do even better late in the half with one of the finest saves you’ll ever see.

O’Donoghue netted in the 10th minute for Kerry, finishing off good approach play from the lively Sarah Houlihan and Laura Rogers, and Shine’s charges had a 1-3 to 0-0 lead.

But Armagh roused themselves to register 2-5 without reply, as Kerry struggled on their own restarts.

Mackin netted twice in a minute midway through the half to turn the game on its head and both were cracking finishes past Fitzgerald.

But the goalkeeper produced a magnificent tip-over save three minutes before the break to deny Mackin a hat-trick goal - when it seemed certain that the net would bulge.

Anna Galvin drew Kerry level at 2-7 apiece with a 28th minute goal but Armagh’s response was impressive, as scores from Aoife McCoy and Lauren McConville established a two-point half-time lead.

It could have been even better as Armagh registered seven first half wides - and Fitzgerald produced those two fine saves - but the turnaround from six points down early on was impressive.

Sean O’Kane’s team needed to build on that platform against the pre-match favourites but they were rocked back on their heels just 20 seconds after the restart, as Ní Mhuircheartaigh scored Kerry’s third goal.

From there until the finish, they would not be caught, as McCoy and Mackin scored Armagh’s only points of the second half.

Mackin’s 36th minute point was verified by ‘score assistant’, in use for the second time after Ciara McAnespie’s goal for Monaghan was awarded against Cork last Monday.

That score kept Armagh in touch, as they trailed by just two points, 2-11 to 3-10, but Kerry on the spin to close the game out, with the Orchard County scoreless after Mackin’s effort.

They were four adrift, 2-11 to 3-12, when Marley was yellow-carded for a tackle on Ní Mhuircheartaigh, and there was no way back.

Armagh conceded just two further points after that but despite the fact that they were chasing the game, they still packed players behind the ball and Kerry were comfortable as they booked a massive date with Dublin.

That game, in a fortnight’s time, will mark Kerry’s first semi-final appearance since 2015.