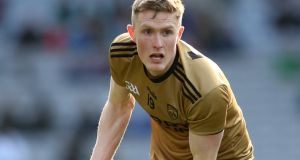 Jason Foley: “Whoever comes into the semi-finals will certainly have earned it.” Photograph: James Crombie/Ipho

Of all the statements of intent from the opening weekend of the Super 8s – and in truth there weren’t many – the re-emergence of the Kerry defence is perhaps most conspicuous. Especially in full back Jason Foley.

After conceding three goals in the Munster final win over Cork, and another three in the league final defeat to Mayo last March, Foley and company held Mayo to 0-15 at Fitzgerald Stadium on Sunday, Kerry scoring 1-22 at the other end to run out 10-point winners.

Mayo had also put two goals past Galway in the fourth round qualifier, plus another two past Armagh in the previous round. They had some chances in Killarney, including a late penalty for Cillian O’Connor which was blasted over the bar, but Kerry held their line intact.

Knowingly or otherwise, Foley was the subject of some criticism in the aftermath of the Munster final, yet gently suggested they all ignore it. Besides that defence goes on a trial again on Sunday when they meet Donegal in Croke Park for the first time since the 2014 All-Ireland victory, Donegal beating Meath in their opening game.

“We’d be a very tight-knit group, don’t tend to listen to that type of stuff,” said Foley. “We got over the line against Cork, a good Cork team, and pushed things on at training over the past few weeks.

“Look, we took some positives, some negatives. No team likes to be conceding three goals in any game, so Donie Buckley, Tommy Griffin and Peter Keane were working very hard with us in training, to put those things right. We just get on with our job at training every night, don’t take it personally.”

Under Keane, Kerry continue to seek that balance between defence and attack, and that looked more conspicuous on Sunday too: “Yeah, we were set up very defensively in the earlier part of the year, but look, things happen in games, sometimes you concede goals, sometimes you don’t.”

Still only 21, the Ballydonoghue defender wasn’t involved when Kerry beat Donegal to that 2014 All-Ireland, although he was on the bench with the Kerry minor team who also beat Donegal that day, a team under current Donegal senior manager Declan Bonner.

Keane only took over the Kerry minors the following year, guiding them to three of the last five titles in a row: what Foley does recall about that day were some of the tactical decisions by then Kerry manager Eamon Fitzmaurice which ultimately swing the result their way

“It seems a long time ago, a great day to be a Kerry footballer that day, but a lot has changed since 2014, new players, new management on each set up, and we don’t tend to look back on those couple of games at all.

“Yeah, there was some serious tactical awareness of that Kerry management team, they got it spot on, James O’Donoghue was playing inside for most of the year, came out and played a kind of roaming role, but that was to play against that Donegal team, and their set up has changed a bit since then, personnel and tactically. But that was a tactical master class that day.

“But really we were just playing for different teams. Kerry don’t have one set game plan as such, and if it was someone else in the final, we might have prepared differently.”

Since beating Donegal in Croke Park that day, Kerry’s record at GAA headquarters hasn’t been great, this year’s league final defeat also sitting alongside defeat to Galway in last year’s Super 8s stage: something for Foley to perhaps thing about ahead of Sunday.

“Maybe, it might be spoken of, the night before maybe, but it’s just another stadium, another team, and no one likes to lose there. If we can get a win against Donegal, that would be great for us. But I think the new system is very positive for us, more games for players, and that’s what players want, to be tested against the best opposition possible.

“Before you might have come into a semi-final with not a lot to work on, and that can be a dangerous place to be, but I think all the teams now are coming into the same path at this stage, three games to prove yourself, and whoever comes into the semi-finals then will certainly have earned it.”

Some consolation for O’Connor, perhaps, in that his six points against Kerry brought his championship tally to a record 23-285, eclipsing the previous all-time top scorer, Kerry’s Colm Cooper, who scored 23 goals and 283 points in his career.