The Backdoor: The game’s evolving – lump it in high 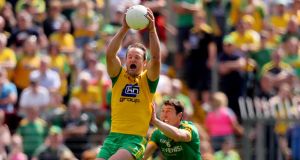 2019 will henceforth be known as the summer of resurrection, the restoration of a dying breed, the return of one of the greatest sights in the game – the big full-forward.

Jimmy Barry-Murphy said he wanted a “quick, skilful and athletic team”, that he’d rather have “greyhounds than elephants.”

But what if elephants had the agility of greyhounds?

With each passing generation the game evolves, and sacrifices must be made for the sake of evolution.

The advent of modern football, needless to say, saw the brawny full-forward sacrificed, but we’re seeing a comeback. Finally.

Not only has he retained his physicality, he’s brought the agility needed for the rigours of the current game and no one player illustrates this welcome reinstatement better than Cathal McShane.

Mark Bradley had previously been playing the role for Tyrone - the man on a solo mission up front - but his stature and skills were unsuitable, forcing Mickey Harte into a rethink following last year’s All-Ireland final defeat. The steely-eyed, red-haired remedy was right in front of his eyes all along.

To date McShane has scored 2-36 in the championship, eight points against Roscommon, his style of play enabling teammates to swarm back in the knowledge that their full-forward is capable of jostling with any back in the country, and without the comfort blanket of teammates nearby.

He’s pivotal to this Tyrone approach and should they go all the way and dethrone the Dubs the Owen Roes man, dare we say, must be a prime player-of-the-year contender.

He’s not alone, of course, with Darren Coen, Mickey Newman and Brian Hurley all contributing to this long anticipated revival while Michael Murphy is always a tempting option at the edge of the square for Declan Bonner.

The game’s evolving, folks – lump it in high and long.

By the numbers - 12: Galway and Meath served up a 12-goal thriller in the All-Ireland junior football semi-final. The game went to extra-time with Tyrone winning by one, 7-17 to 5-22.

The championship, by its nature, brings tragedies.

The weekend just gone brought the latest as sadly another year passes by without Patrick Horgan winning that elusive Celtic cross.

The Glen Rovers man made his championship debut back in 2008, the same summer TJ Reid, Joe Canning and Séamus Callanan also graced the championship stage for the first time. Yet somehow, Horgan

remains the least heralded of the four. Bar medals of course, his career has been in no way inferior and, in some aspects, it’s been superior.

The third highest scorer in championship history admits to having little interest in the game outside Cork, though that boundless skill-set screams otherwise: Horgan is to hurling what a sommelier is to wine, or so it appears to the naked eye of the onlooker.

A master in his craft

With a tally of 3-10 from his side’s 3-18, Brian Cody didn’t need to sink to the depths of his intuition to realise cutting off the supply to the inside-forward line would hinder Cork’s chances. Still, Horgan shone off scraps.

There was the torpedoed penalty and the goal as he genuflected; his third goal saw him crawl like a mantis above three Kilkenny men before slotting it.

He’s arguably the best player in the country without an All-Ireland and, alas, his summer is over. What a shame.

“We’re very precious about tickets in the GAA. We queue for concerts, people lie out in the street for three weeks before big concerts if they want that ticket. If you want a ticket to go to a neutral [venue] game, and you want to see your team bad enough, you will find a way to get a ticket – Kieran Donaghy called for neutral games to be taken out of Croke Park during Sky Sports’ Saturday evening GAA coverage.”

The debate began on Monday: does he need three points, or four, or five?

Cillian O’Connor was teetering on the brink of Colm Cooper’s record, the championship’s all-time top-scorer; that much we knew. There was contrasting opinions however regarding just how far off he was.

With no official go-to source social media became a mire of confusion when O’Connor’s inevitable ascension to the summit could – and should – easily have been utilised as a promotion tool: here was a Mayo man entering the Killarney den and attempting to take the Kerryman’s record – the stuff of a marketing department’s dreams.

Other advancements within the association must be commended, the quality and quantity of their social media content, for example, which was responsible for the images of James Carr skinning hapless Tribesmen diffusing throughout the globe midweek – a cornucopia of promotion through millions of views. That should be applauded.

If only similar efforts could be injected into a new project – an official database, the lack of which is veritably humiliating for a sporting organisation of the GAA’s size. For too long the public has been depending on the thankless work of Leo Gough and Rob Carroll, to name just two champions to the cause, who put numbers to the feats for the mere love of it. Contemporary fan demand numbers; they’re not getting enough.