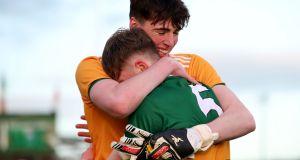 Kerry’s winning run at minor level continued at Austin Stack Park on Tuesday night, but it took a tremendous defensive performance late on to suppress a Cork comeback in a thrilling Munster MFC semi-final played in front of 3,772.

It took a 62nd minute punched point by substitute Jack O’Connor to stretch the Kingdom’s unbeaten run to 26 games and they will now meet Clare in the final.

It was an even opening half with Cork’s midfield of Niall Hartnett and Joseph Harte on top, but Cork wasted far too many scoring chances - with the notable exception of Conor Corbett who kicked four first half points from play, while Aodhán Ó Luasa converted two frees.

Kerry got an early goal from Paul Walsh who was well shackled by David Buckley, while Dan McCarthy Darragh Rahilly and Walsh added points as the sides were level 1-3 to 0-6 at half time.

Kerry held sway in the second half with captain Paul O’Shea giving a man of the match display as his side hit six unanswered points from Walsh (two), Ruaidhrí Ó Beaglaoich (two frees) and one each from Dan McCarthy and substitute Jack O’Connor.

Kerry led by four but Cork refused to give up and after a point from Ó Luasa and a well-worked goal from Corbett in the 61st minute it looked as if extra time was on the cards. But then super-sub Jack O’Connor punched the winning point in the final minute to secure a dramatic win for the Kingdom.

Two late, sweet points by Shane Meehan gave Clare the edge in Semple Stadium and sent them into this year’s Munster MFC final.

Scores were thin on the ground during the first half, with Tipperary’s goal via an unstoppable Max Hackett shot giving them the impetus.

After a fine Seán O’Connor point for Tipp following a solo run from the right, Clare edged their way back into contention with successive points from Emmet McMahon and Meehan to leave them 1-2 to 0-4 behind at the interval.

Clare got a dream start to the second half when Kevin Keane fisted home a high ball from Chibby Okoye.

Shortly afterwards, Christy English finished well after taking a Kyle Shelly pass, scoring with a low shot under the Clare goalkeepkeeper to put his side in front.

However, as in the first half, Clare finished stronger.