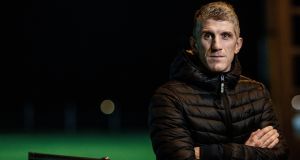 Kieran Fitzgerald: “I’m looking forward to the year ahead I think he’ll be good. He has an unbelievable knowledge of football.” Photograph: James Crombie/Inpho

Corofin and Galway stalwart Kieran Fitzgerald says he is excited at the prospect of Padraic Joyce bringing some of Corofin’s footballing tactics on to the inter-county scene.

Fitzgerald and Joyce won an All-Ireland together in 2001 and after marking the Killererin man in training for years and battling in the club championship, Fitzgerald is well qualified to assess Joyce’s Galway side.

The Tribesmen ousted Mayo from the FBD League with a penalty shoot-out win in MacHale Park in Joyce’s first competitive game in charge, and his former team-mate reckons his beliefs in how the game should be played will bring a fresh outlook into Galway football.

“I think he’ll be good. There is such a positive vibe going around lately. We played Galway just before Christmas [in a challenge match] and I was very impressed with them,” said Fitzgerald, who will line out for Corofin this Sunday in a third straight All-Ireland senior club final.

“I thought they played some lovely football. I’m looking forward to the year ahead I think he’ll be good. He has an unbelievable knowledge of football, and I thought when he spoke in the dressing room he used to always make sense. It was always with great clarity, and to the point.

“It was clearly obvious when we played them that they were trying to do that. Hopefully the county and supporters give them time to develop. It’s not all going to happen all at once and I’m sure there’s going to be a few rocky patches along the way. Division One is difficult.”

Fitzgerald recently turned 39 and a couple of months after he won his 14th Galway senior championship with Corofin, he hopes to claim a fourth All-Ireland club medal with victory against Kilcoo this Sunday at Croke Park.

On the sideline is a familiar manager in Mickey Moran, and after facing the Derry native against Mayo, Sligo, Derry and Slaughtneil in the past, Fitzgerald expects a big test from the Down champions.

“What he [Moran] has done has been so impressive and speaking to guys, everybody speaks so highly of him. He’s really impressive guy and to do what he’s doing with Kilcoo and Slaughtneil – they were so impressive – he’s been good for the teams he’s been with.

“As well as playing football I’m also a really keen follower of football, I’ve watched Kilcoo down through the years, albeit this year is their first year to win an Ulster championship. We would know a lot of their players, the Branagans, the Johnsons and Conor Lafferty are well-known players, and obviously Mickey as well is over them.

“We know what it’s like to beat the Dublin champions: in 2014 we’d beat Vincent’s in an All-Ireland semi-final and what a hurdle that was for us to get over. It was like a huge weight off our shoulders and such elation to be in an All-Ireland final. The momentum and energy we got from that was huge.

“They did that against Ballyboden by three points the last day and were impressive as well, so energetic and fit. I was very impressed with them. We know we’re facing a tough test.”