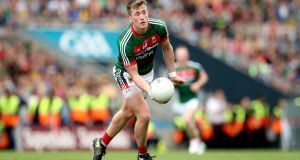 Cillian O’Connor is expected to make his Mayo return against Down. Photograph: Ryan Byrne/Inpho

[Extra time if necessary and winner on the day]

Antrim v Kildare, Corrigan Park, 3pm – One of those qualifiers dragged into the undecided column by home advantage and the fact that one team, Antrim, won their last match in the series whereas the other is joining after a low-key exit from the provincial championship. Kildare take some positives from keeping Dublin goal-less and creating a couple of opportunities themselves but they haven’t been firing this season. Antrim were too fast and, strangely, confident for Louth and with a very specific home advantage in the tiny Corrigan Park, they can exert pressure here.

Derry v Laois, Owenbeg, 5pm – Having done well to overcome Westmeath, Laois went down to Meath with more of a whimper. They have the capacity to win this but need to sort out their attack, which even at its best has been too individualistic. Derry had a stress-free, if lengthy, journey to Wexford in the last round but a three-goal barrage in the first quarter put the match to bed without further ado. The counties haven’t played since sharing the league points more than three years ago in a six-goal Portlaoise thriller. This will be more attritional.

Longford v Tyrone, Pearse Park, 5pm – Two teams with proud qualifier traditions albeit in different spheres. Tyrone reached last year’s All-Ireland through the route whereas Longford have been turning over more highly rated opponents since the qualifiers started. They welcome Mickey Harte’s damaged looking team whose eye-opening inability to lay a glove on Donegal recalculated many optimistic expectations. Interest will focus on whether they abandon the more attacking orientation of the league in favour of the more familiar defensive formation. Longford did well to force Kildare to a replay but this should be a step too far.

Westmeath v Limerick, TEG Cusack Park, 6pm – Westmeath will have been disappointed that they didn’t get a crack at Meath in Leinster but Laois deservedly took away that opportunity. John Cooney’s side have had a handy couple of draws to date, wiping out Waterford in round one and now getting another home shot at a Limerick side, who once they failed to take an early goal chance were traumatised by Cork as a reward for beating Tipperary in Munster. Westmeath will have seen how Cork neutralised Iain Corbett by effectively marking the Limerick centre back and playmaker.

Leitrim v Clare, Avantcard Páirc Seán Mac Diarmada, 6pm – Clare put in the familiar, decent shift against Kerry in the Munster semi-final and again came up short but along with their conquerors, are the only Munster county in the top half of the league. They travel to Carrick-on-Shannon for what could be a more daunting task were it not for the extraordinary number of defections from the Leitrim panel since the championship started despite an encouraging league campaign. It illustrates the nature of the challenge for teams when some of their players fundamentally see no prospects in senior championship competition.

Monaghan v Armagh, St Tiernach’s Park, Clones, 7pm – The mood music hasn’t perked up for Monaghan since losing to Cavan in their Ulster first round. One of the most competitive qualifier teams this decade – as well as twice provincial champions – there was an almost palpable sense of fatigue about how they went about their business against Fermanagh.

News of Darren Hughes’s suspension for getting involved on the pitch when acting as a water carrier has cast a cloud over his already injury-disrupted season.

A year ago, Malachy O’Rourke’s team got a very kindly succession of manageable qualifier draws. This season lacks that encouragement and the bristling Fermanagh challenge now gives way to an Armagh team apparently going up in the world.

Although Kieran McGeeney’s tendency has been to stack his bench rather than starting 15, the overall impact has been impressive with young talent blending with more experienced players. An ideal opportunity with Monaghan looking like they are running on empty.

Down v Mayo, Páirc Esler, 7pm – Since scuffing the gloss off their league win by losing at home to Roscommon, Mayo have been enduring a difficult time with the fallout from the shock exit combining with further bad news in the shape of injury to one of the great finds of the league campaign, centrefielder Matthew Ruane – a particular loss when set against the likely continuing unavailability of Séamus O’Shea, Donal Vaughan and the long-term injury to Tom Parsons.

There is better news in the expected return of Cillian O’Connor, against the backdrop of costly missed frees against Roscommon.

Down manager Paddy Tally will have seen enough during his stint as Galway coach to have detailed knowledge of this weekend’s visitors. His team’s tussle with Armagh was a close contest that places them in a very competitive bracket.

The comeback defeat of Tipperary was their first qualifier win in five years and they’ll be a handful but Mayo should have the know-how to survive.

Offaly v Sligo, Bórd na Móna O’Connor Park, 2pm – A renewal of one of the league’s more dramatic fixtures, Offaly’s last-minute, last-day deliverance from relegation in Division Three. Under John Maughan and with a rejuvenated Niall McNamee back from retirement they have given a sturdy account of themselves in the championship, nearly springing a surprise on Meath and accounting comfortably for London. Although already relegated Sligo pushed Offaly to the brink in the league but their miserable season – the heavy defeat by Galway not exactly positively contextualised by the Connacht final – is likely to end after failing to win any matches to date.

1 Diego Maradona dies of heart attack, aged 60
2 Gordon D'Arcy: I know what Joe and Cheika would do. Fix the basics
3 Darragh Ó Sé: Cork and Donegal went out with the wrong attitude
4 Ryan happy to get back to leading by example when Sexton returns
5 Can Solskjaer’s Man United find their groove when it matters?
Real news has value SUBSCRIBE

Diego Maradona dies of heart attack, aged 60 16:52
Cavan confirm they have no issue with playing Dublin at Croke Park 16:21
Ryan happy to get back to leading by example when Sexton returns 15:54
Mayo’s James Horan criticises ‘outrageous’ 26-player match day limit 13:52
Dundalk’s Jordan Flores on the shortlist for Fifa Puskas award 10:35
Crossword Get access to over 6,000 interactive crosswords