Cahill pleased with Waterford’s character as they claim Rebels’ scalp 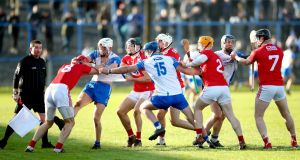 There were a few contexts to Waterford’s fine win over Cork on the opening weekend of the Allianz Hurling League; it’s been a hard couple of years for the county, which has no championship wins in two seasons despite the abundant opportunity of the current round-robin structure.

They are therefore on a third manager in three years, Tipperary’s Liam Cahill, who had shaken things up a bit on taking up the reins. He’ll know that despite the summer gloom, the county was in last year’s league final so the usual caveats apply with greater than usual intensity.

But. But. Anytime Cork cross the border to get beaten is by definition a cheery thing. This is all the more the case when a new-look defence has tied itself in enough early knots to concede two – charitably put – avoidable goals.

“Two sucker punches really early in the match,” echoed Cahill afterwards. “What a time to give them away – early. That was a real test of the character of the boys to come back, keep the scoreboard ticking over. Keep their heads.

“We have a tendency in this squad, in the short period I’ve been with them, to invite teams on to us. It’s something we really have to look at, basic handling errors that allow teams claw themselves back into the game when we have them on the rack.

“We have to look at closing out matches properly, as well as conceding early.”

The latter caution indicated that although the response to the early incisions by Conor Lehane and Shane Kingston had been heartening – by the 14th minute Waterford had the scoreboard back in hand and more or less led from there to the end – an injury-time concession of 1-1 would leave them all sweating on the outcome.

Adding to the positivity was that whereas former Hurler of the Year Austin Gleeson, who was a late withdrawal because of a quad injury picked up with WIT in the Fitzgibbon, isn’t expected back immediately, both Pauric Mahony and Kevin Moran will be available next week

Kieran Kingston, back in charge of the Cork hurlers, was perplexed by the squandermania of 17 wides and the number of frees given away.

“Scoring 3-17 was great but our conversion rate, just looking at some stuff, was very poor, compared to them. The frees we conceded were very poor. They’re controllables; they’re things we can work on. It’s good this time of year to realise that. You’re not going to win with that kind of conversion and conceding that amount of frees.

He was also mindful that in a week they welcome the All-Ireland champions Tipperary, who are next on the list.

“There’s no easy games in this. Every team on a given day can beat the other – even home advantage; sometimes you wonder is it good or bad.”

The champions had a vaguely similar reversal of fortune in Thurles on Saturday night when predecessors and league holders Limerick overcame a nine-point half-time deficit to outscore them 2-10 to 0-5 in the second half.

All-Ireland finalists Kilkenny had a commanding win over Dublin despite the absence of a number of key players after the previous weekend’s club exploits. This was despite having to play with 14 men for more than half the match after a red card shown to Richie Leahy in the 26th minute. They still won pulling up, 3-21 to 0-18.

In the more permissive confines of the expanded Division One, there were also big wins for Clare over Carlow, Galway against Westmeath and on Saturday night Wexford over Laois.

Davy Russell on neck injury: ‘it was a very close one and I dodged a bullet’ 17:00
Aidan Coleman steps in for the ride on returning Epatante 17:00
Spurs chairman Levy warns of ‘irrecoverable loss of income’ if fans don’t return 14:03
Manly Sea Eagles NRL player Keith Titmuss dies after training aged 20 11:30
Arsenal and Leeds condemn online abuse of Pépé and Alioski 11:04
Crossword Get access to over 6,000 interactive crosswords