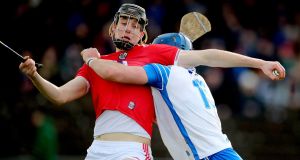 In the battle of New Year makeovers, Waterford emerged with an – arguably unnecessarily – edgy win and a pile of hopeful indicators for the season ahead. That did not appear to be a likely outcome after the early minutes when home hearts in the crowd at a sunny Walsh Park must have sank.

Opening league matches are usually inscrutable occasions and the lack of convincing precedent makes them hard to call but a cursory glance at the teams suggested that Cork’s 15, closer to full strength than their opponents, had a sufficiently menacing attack to put the squeeze on a Waterford side short of a clutch of senior players.

Could a callow looking home defence hold out to give their forwards a shot at winning the points?

If the question was being cogitated at the throw-in, a more panicky concern became widespread when some Keystone Cops defending opened Waterford up for two goals in the second and third minutes. Eeek!

Suddenly the cutting of multi-All Star corner back Noel Connors from the panel and the resolutely man-to-man defensive system looked to have uncovered an appalling vista.

Conor Lehane and Shane Kingston helped themselves to the green flags with Patrick Horgan creating the second. It was a nightmare opening for the Waterford full-back line.

It must have been one of the most gratifying outcomes of the afternoon for Cahill that his defence settled down so effectively for the remainder of the match. They worked really hard and succeeded in capping the well to the extent that they outscored Cork by 1-24 0-15 over the remainder of normal time.

A great finish by Kingston and a third point of the day for Damien Cahalane in injury-time at the end of the match slashed the final margin and led to a nervous finale for the home supporters in a crowd of 4,235.

But by and large, the defence, superbly anchored by Darragh Fives, was aggressive and confident in working the ball up the field from the back.

Waterford were assisted by a few factors. Cork were ridiculously wasteful and fired 17 wides, something Kieran Kingston at the start of his second managerial spell lamented – although he did take comfort from the three goals, given how hard come by they have been for the team in recent times.

They were also sloppy in their defensive discipline, yielding up a tidy bundle of frees, which allowed Waterford stem the bleeding and get back into contention.

Even there, though, there was further optimism for the winners, as in the absence of the suspended Pauric Mahony, Shane Bennett’s difficulties on long-distance frees left him with remarkable personal stats for the afternoon: 0-11, seven frees, a 65 and three from play plus six wides and three dropped short – that’s 20 shots at goal. Mahony would surely have cashed in on a few more of those.

With Shane not around at the moment, the other Bennett brother Kieran had an all-action afternoon. His five points, including a line-ball, meant the family had banked 0-16 of the county’s total and came from some terrific long-range striking while his abrasiveness around the field cost a couple of frees and a yellow card.

Amongst the forwards, former soccer pro Dessie Hutchinson, who had impressed so much in Ballygunner’s championship, found the step-up demanding but he showed well for ball and once he acclimatises a bit more, is likely to be a handful.

Anyway, by the 14th minute Waterford had wrested the lead from the visitors. They key score was a 12th-minute goal by Patrick Curran, squeezed in at the end-line after he had fastened onto a mishit shot.

Cork hadn’t downed tools but they weren’t finding any more easy pickings although a brief, 27th-minute flare-up of the defensive malaise allowed Kingston a sight of goal that his shot narrowly missed.

It was an at times feisty business and Wicklow referee John Keenan just before half-time, turned a blind eye to a scatter that was building critical mass while play went on before happily it was defused and two players, Bill Cooper and Jack Fagan, shown yellow cards.

Waterford were good value for a two-point lead at the break. In the second half, the match settled largely into a shoot-out. The winners’ confidence in moving the ball through the middle in short, passing movements created plenty of chances in attack.

Mark Coleman leveled the match for Cork going into the final quarter but the momentum was with Waterford and by the 70th minute they had stretched the margin to five for what appeared a likely comfortable win – rendered less so by the concession of 1-1 in injury-time.

Cian Healy’s hunger for battle undiminished by the years 06:00
Railway looking to build on their European experience 06:00
Sean McDermott plots route from Norway to Ireland’s No 1 06:00
This month a decade ago, football and Dublin changed course 06:00
Connacht face daunting task against Edinburgh 06:00
Crossword Get access to over 6,000 interactive crosswords