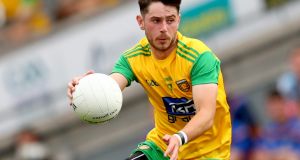 Donegal’s Ryan McHugh: “He has been fouled an average 10 or 12 times a game, and there are very few cards for the fouls.” Photograph: James Crombie/Inpho

Bonner says he is concerned at the high volume of heavy blows the 2014 Young Player of the Year has shipped.

McHugh was left in a race against time to be fit for Donegal’s Ulster Championship opener against Cavan, having sustained a concussion injury as a result of a clash in Donegal’s League defeat to Tyrone at Healy Park. The counties meet again in Ballybofey on Sunday week in the final All-Ireland quarter-final group stage game, when an All-Ireland semi-final place is up for grabs.

“He gets a huge amount of attention, and officials have to look at it,” Bonner said. “The amount of fouls says it all. He has been fouled an average 10 or 12 times a game, and there are very few cards for the fouls.

“It’s continuous. If you get away with something, you’ll continue to do it. It has to be stamped out. Officials have to see that. We have two linesmen, four umpires and a referee. They have to see what’s going on.”

In Donegal’s Ulster semi-final, three Down players – Ronan Millar, Shay Millar and David McKibben – were given black cards for fouls on the Kilcar man.

Bonner said: “He needs protection. He’s not the biggest in the world, but he’s as brave as they come. He sticks his head in and he does need protection.”

Donegal will be without Patrick McBrearty, who goes under the knife for surgery on a cruciate injury on Friday, and Eoghan Ban Gallagher, who is out due to an arm injury sustained last Saturday against Roscommon. Gallagher was replaced by Neil McGee 19 minutes into Donegal’s 0-20 to 0-13 win over Roscommon in Dr Hyde Park.

Bonner says the Killybegs man will be out “for a number of weeks”.

“Tyrone will come too quick, and possibly if we got further,” the Donegal manager said. “It’s disappointing, but it will open the door for someone else. Time is short, and the games are coming thick and fast.”

Bonner is well aware of the high stakes that are at play when the two old foes cross swords in a fixture that will go down as the biggest ever played in Ballybofey.

Bonner said: “It gives it an extra edge being Tyrone. There has been a great rivalry down the years, and this will be no different. We were back into training last weekend, and once the Roscommon game was finished it was all eyes on Tyrone. We have a semi-final at stake. There is a huge prize at stake.

“There is a big rivalry. Donegal, Tyrone and Monaghan have been the top three teams for the last decade, and have had big rivalries. It’s a northwest derby, and I’m sure this will be an exciting one.

“A lot of older guys have moved on and new ones have come in and stepped up to the mark for Tyrone. We have introduced a lot of young lads too. A lot of the older generation of players have gone. But the game is no less. It’s huge.”