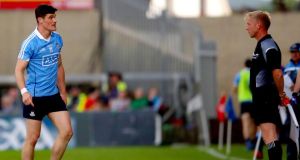 Diarmuid Connolly will appeal his 12-week suspension for pushing an official during Dublin’s win over Carlow.

Following a CCCC meeting last week the Dublin forward was given a proposed 12-week ban for pushing linesman Ciaran Branagan while remonstrating with him. The incident was seen on television, with the 29-year-old St Vincent's attacker also seen pointing his finger at Branagan.

The ban would rule Connolly out until August but he has launched an appeal and the Central Hearings Committee are likely to hear it in the coming days.

The half forward was frustrated by the official's decision to award a line ball to Carlow, which he felt should have gone in Dublin's favour.

The incident was preceded by Connolly grabbing the ball and being surrounded and jostled by three Carlow players. His remonstration with the linesman took place as he re-entered the field.

The incident is believed to have been included in the match report of referee Seán Hurson, however he took no action (other than note the incident) during the match.

The suspension, if confirmed, will put the All Star attacker out of commission until the weekend of Dublin’s All-Ireland semi-final should the team retain its Leinster title and win the subsequent All-Ireland quarter-final.

Jim Gavin's team await the winner of Offaly and Westmeath's replay in the Leinster semi-final, as they go in pursuit of a seventh provincial title in a row.