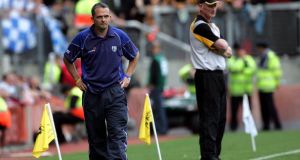 The feeling that something isn’t quite right when Kilkenny are publicly lined up for execution on the basis of a league defeat isn’t completely reliant on an outdated perception of the Leinster champions at their awesome best.

Wexford have undoubtedly had an excellent spring. Charged up by David Fitzgerald’s management protocols they have returned to the top flight of league hurling and the defeat of Kilkenny in the Nowlan Park quarter-final was genuinely groundbreaking.

There is a central concern, though. Can Wexford come with something new? If there is one thing that we know about Brian Cody’s Kilkenny is the detailed nature of their grievance banks. Fool him once, well done; fool him twice – when was that?

Word is that Kilkenny have been practicing 17-a-side to sharpen up in crowded environments; they’ll be ready.

Look at the replay record and the fate of Galway in 2012 and then speculate whether the champions will have a plan for Saturday evening. Wexford will be aware of that but is it realistic that they can unveil an entirely new strategy?

Wexford Park has an aura that will undoubtedly help the home team but other straws in the wind aren’t as promising. Injury has sabotaged Liam óg McGovern’s comeback and David Dunne – a goalscorer in April – is reportedly out with a hamstring pull.

Kilkenny on the other hand expect to have Michael Fennelly back in harness – a huge boost – and even Pádraig Walsh is given a shot at taking his new position at full back. Liam Aylward is back after a year and scoring goals where he left off in 2015.

The home side cannot be written off. They are particularly well suited to the system they have adopted. Lee Chin has been wonderfully imposing both as a ball winner and scorer and Conor McDonald was a formidable player in the league match. The team play with power and commitment.

Kilkenny are in long-term decline but they have quality and are hardwired to defuse threats, even as formidable as this. That will decide it.