Nicky English: Wexford beat Kilkenny – and the past 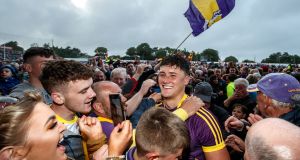 There was some conjecture at the start of the season as to whether this would be the championship when the Kilkenny/Tipperary duopoly was broken and there would be a greater spread of teams capable of winning an All-Ireland title. It’s panned out that way so far, with both counties consigned to the qualifiers.

Saturday night was a special occasion in Wexford Park, a brilliant atmosphere as the Wexford supporters drove their team over the winning line; though not before their long-suffering fans and management were put through the wringer as they watched events on the field.

Wexford were thoroughly deserving winners and fought against not only Kilkenny but historical baggage. When you haven’t beaten a team in the championships for a while you sometimes have to be a good bit better than them to squeeze a narrow victory. That was the case in Wexford Park.

I had seen the evidence of Wexford’s energy and power from the get-go this season, when they played UCD in Gorey. After Wexford’s league victory over Kilkenny in Nowlan Park I thought it would have been virtually impossible for Brian Cody’s men to turn that around.

However, on the other side of the ledger, Kilkenny had time to work hard on the shortcomings in training, their preparations for dealing with a sweeper and they also had players to come back. As it transpired, the gamble in selection didn’t work. Kilkenny had too many holes to fill in terms of team selection, and not announcing their team wasn’t a sign of strength.

Despite all the signs going into the match, the fact that Wexford hadn’t beaten Kilkenny in the championship for 14 years, losing each match by an average of 14 points, made me reject the evidence of my own eyes. Even in the match Kilkenny almost managed to turn back the tide.

Wexford’s superiority in power and energy, the fact that the players were well versed with their roles with the gameplan, set them apart from Kilkenny in the National League quarter-final and was reinforced at Wexford Park on Saturday night.

The home side showed character, particularly after Kilkenny got that early goal. It’s possible that TJ Reid’s missed free had more of an impact than might have been apparent at the time. Wexford didn’t panic and dragged themselves back into the contest.

Despite playing with the wind and employing a sweeper, their fullback line always looked in trouble with Colin Fennelly, and that would be borne out graphically later in the match when Kilkenny mounted that late charge with a couple of goals.

The question at halftime was would Wexford’s four-point lead be enough, and there were others posed later on in that second half when their lead all but evaporated with the brace of goals, as much for the manner in which they were scored.

Mark Fanning made a mistake for the first – he would more than atone subsequently – and TJ Reid’s beautifully struck penalty handed Kilkenny the momentum. Lee Chin had other thoughts, fetching the puck-out, taking on a posse of Kilkenny defenders and driving it over the bar against the wind.

He singlehandedly steadied the ship. I have seldom if ever seen a more magnificent athlete when it comes to hurling. His influence in the second half of the match was immense. There were a couple of highlights: the point after the second Kilkenny goal and an amazing catch over the head of Cillian Buckley, himself a superb athlete.

Chin received assistance from Jack Guiney in particular up front, the latter fighting hard to win the ball and distribute it. Diarmuid O’Keeffe at wing back epitomised the high energy of the team.

In the end they just about got over the line although it would have been less nerve-shredding for the Wexford supporters if it wasn’t for those missed frees by Conor McDonald.

They had reason to be grateful to Mark Fanning following his saves from Chris Bolger. The sweeper system can’t camouflage or shore up the weaknesses in the fullback line, the same ones that were evident against Tipperary in the League semi-final and were once again apparent on Saturday night. Wexford are susceptible to goals.

Naming the team late – I know they did it ahead of last year’s All-Ireland semi-final – is untypical for Kilkenny in the Cody era, prompted by players coming back from injury, Pádraig Walsh and Ger Aylward, but again in un-Kilkenny-like fashion, they were taken off before halftime.

Aylward was rusty but he was winning the ball, Pádraig Walsh was never at the races and probably shouldn’t have been playing. There was a lack of composure all through the Kilkenny team that we are not used to and they were hugely reliant on TJ Reid, Colin Fennelly, Cillian Buckley, and ultimately they were reduced to route one hurling.

When Colin Fennelly had open space he was running amok, but in the second half Eoin Murphy launched long puck-outs and Wexford were able to crowd him out. Kilkenny needed to vary their options.

Richie Hogan, Pádraig Walsh, Walter Walsh, Conor Fogarty and Paul Murphy are pivotal figures now for Kilkenny after the retirements of others, but none of them featured prominently and their newcomers struggled in the heat of Wexford Park. I can’t see Kilkenny emerging from the qualifiers to win an All-Ireland title.

Wexford will need to up their performance to beat Galway in the Leinster final. I disregarded their league form and I’ll be slow to do that again. They beat Galway in Salthill so they’d be confident of what they can achieve against the same opposition.

It is now the open championship with Tipp and Kilkenny in the qualifiers; everything is up for grabs.