Mayo exiles seek divine intervention, and now they have been given a sign 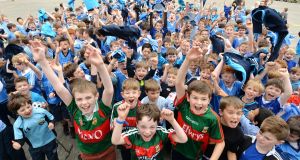 The other 31 counties may be cheering for the underdogs on Sunday. If their more devout supporters are right, Mayo (God help us) can expect divine sympathy too. But in the run-up to another All-Ireland final, Dublin fans are making no apologies for their plans to break western hearts yet again, en route to the home team’s first three-in-a-row since the 1920s.

True, westerners arriving in the city via Heuston Station this weekend will be at first seduced by the diplomatic flag displays along the Liffey quays, with Mayo and Dublin colours given equal billing, on every other lamppost.

But the pretence of neutrality is abandoned at Ha’penny Bridge, where the city council has erected banners on both sides saying “Up the Dubs”. From there on, Mayo supporters will be heading deeper and deeper into enemy territory.

A measure of what they’ll be up against in Croke Park was a Friday afternoon show of force at Scoil Mhuire National School in Marino: the heartland of the imperialist superpower that is Dublin GAA. More than 200 pupils there had dressed in their county jerseys for the day and, as they lined up for pictures in the school yard, they were as boisterous as a full Hill 16.

Four hoarsemen of the Apocalypse

On closer inspection, however, it turned out that in the midst of this noisy mass of blue were four brave students wearing green and red. They were struggling to be heard, naturally. But after an effort, we learned that of these four hoarsemen of the Apocalypse, only one was Mayo-born: Stephen Murphy (11) who emigrated from Ballina as a toddler and was still bravely refusing to go native.

So what’s it like being a Mayo supporter in a northside Dublin primary school? “It’s not as bad as it was four years ago,” he said, thoughtfully. “Me and my friend were chased around the yard then.”

The friend was from Dublin, he added, but was a legitimate target “because he’s a cousin of Aidan O’Shea”.

Of the many houses around Croke Park decked out in blue-and-navy, meanwhile, two in Patrick Heeney House, Summerhill stood out for the symmetry of their flags, banners, and bunting.

One of the men responsible, Damien McCarthy, explained that he and his neighbour had agreed to present a joint front of decorations, and there were signs that others on the street were catching the bug, making this one of the more colourful approaches to the stadium.

Even so, and despite Croke Park being only five minutes away, McCarthy had no plans to be there on Sunday. As always, he would just “watch it on the telly”.

At nearby Clonliffe Road, by contrast, there was a hint of how far Mayo supporters will go, geographically and otherwise, to support their team.

On either side of the entrance to the former Mater Dei Institute of Education, advertising banners for a construction firm currently on site there carried green-and-red colours and the message: “MOM Services Ltd, serving all your building needs, wish Dublin the best of luck but UP MAYO”.

This was the initiative of company director John Boyle, who when negotiating a contract with Dublin City Council to provide a “family hub for the homeless” on the grounds, insisted on a clause allowing him to put up pro-Mayo signs on All-Ireland final weekend.

The other people at the meeting, mostly Dubs, “all laughed”. But the deal was struck and, since the company will be on site for two more weeks, the signs will there for a replay, if necessary.

Claremorris-born Boyle will be at the game(s), having attended every Mayo final involving since 1989, even when he was in the US and had to fly home. His support has now extended to enlisting a landmark Dublin building for the cause. Ominously for the locals, this means that not only are Mayo claiming to have God on their side this year, but via Mater Dei, they have the Mother of God too.