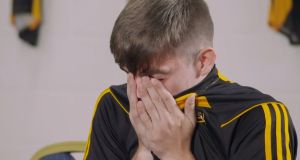 Kilkenny man Steven Scallan shows the Underdogs selectors what it meant to him to be involved in the squad. Photograph: TG4

TG4’s Underdogs series follows the journey of some of the best club players from around the country as they prepare to take on Dublin on October 19th. To be eligible players (over 18) must have never previously played intercounty senior championship football. Episode six is at 9.30pm on Thursday.

So far the eliminations have been the focal point of the Underdogs series - they’re dramatic, emotional, and all round entertaining TV.

Approaching the end of each camp, three players are nominated to be cut from the squad. They have a match (usually on the last day) to do their talking on the pitch, and then the three of them sit down with the selectors to do some actual talking about why they deserve to stay. One player is sent home at the end of it all - very X Factor I know.

The stars of the show so far then, and the players the viewers have got to know the most, are those who’ve had to fight to stay on the squad. And they deserve any and every bit of stardom they may get, because they’ve earned it.

In the first camp I sat in the dressing room in Roscommon beside Jesse Walsh, the Cork native was the youngest player in the squad and was one of the players nominated ahead of our match against St Brigid’s. He’d be cut from the squad the following day.

Generally the players nominated start the match - and if they don’t they come on early - which doesn’t always help in terms of getting the best result but it allows them the fairest possible shot at impressing. I really felt for Jesse sitting beside me in that dressing room, clearly wretched with nerves. He didn’t start and was unfortunate with how some balls dropped for him when he did see action. But he’ll be a better man and player for the experience, and spoke with great dignity to the cameras afterwards.

The whole process is a strange TV concept that you wouldn’t expect any GAA player to be prepared for dealing with. Being told before a club match that you’re playing for your place, or before a county match that your spot on the squad is in jeopardy, is one thing, but try doing something similar on national television. Plus having to then argue it out with two teammates as to why you want and deserve the opportunity more than they do.

However, I have found that some lads have actually benefitted from the experience of being nominated and surviving, even if their nerves took a hammering. Armagh’s Ruairi Cunningham, for instance, came on against St Brigid’s and played well and since then he’s become one of our most consistent performers. Stephen Harford likewise put in a powerful display against Moorefield and has been a regular ever since. And young Sam Duncan is the latest to have put in a big showing when the pressure was on him.

Meanwhile, we have lost some good players and some great lads over the past few weeks and months. The likes of Aaron Forbes down in Kerry, he has a lot of intercounty experience with Laois but just couldn’t find an adequate balance between his club, work and Underdogs commitments. Others have had their journey ultimately ended by injury. It is hard to see someone who had the same goals and dreams as you did, putting their neck out there in the first place back in May and having it all cut short so dramatically.

Last week we saw - he cried a little - and heard Steven Scallan really fight to show the selectors just what it means to him to be a part of the squad. Which was fantastic to see, and he wasn’t bluffing. The former Kilkenny minor captain hasn’t missed a single session. And in fairness that stuff really does matter to the selectors too.

Valerie Mulcahy, Paul Galvin and Ray Silke obviously take no satisfaction from of the elimination process. They’ve always maintained that they are looking for the best people as well as the best players, and have held firm to that in making what they believe to be the fairest decisions.

I believe they’ve conducted themselves with great honesty throughout the whole process, as do any of the players I’ve spoken with, which is all anybody can ask. When Paul introduced Kieran Donaghy to us down in Athlone - not only did he describe him as being the greatest ever full forward, a former Underdog who became Footballer of the Year, but also as the ultimate teammate and an amazing man. It was equally as important to him, and Donaghy echoed the same principles in his chat with us.

The elimination process is hard to watch, never mind be involved in, but I think it’s in a weird way formed better people, better players. The two go hand-in-hand on a real team, and are especially important for a team of Underdogs.

Aside from the latest - and final - evictions in Thursday’s episode, keep an eye out for former Galway hurler, now performance psychology coach, Tony Óg Regan. His talk with us was priceless - telling us about the power of visualisation, how and when to increase focus and likewise calm, as well as answering all of our many questions.