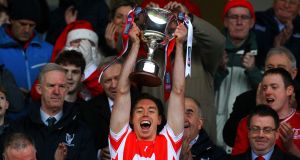 All-Ireland champions Cuala reversed the usual order of their AIB Leinster hurling championship matches by putting the match to bed in the first 20 minutes before getting tested for a while on either side of half-time.

By the end they were literally a point a man the better team - Kilcormac-Killoughey having lost Conor Mahon just before the break to a red card.

A blistering start to the provincial final left the Offaly club trailing by 11 before they mustered their first score, in the 25th minute and although they plugged away spiritedly in the second half, they never got the deficit below seven and were picked off by the champions score by score until the final ended with back-to-back titles for the Dalkey club - only the fifth time this has been achieved in the province.

“We went after that first quarter,” said winning manager Mattie Kenny. “We wanted to set the tempo. Got the few early scores. Missed a few as well. They defended well. Con was in early for a goal but they got back on him very, very quickly. We keep building that score. That first quarter gave us a lead that we were able to take into the second half.

“We worked very hard in that first 15 or 20 minutes but then our tempo dropped. That allowed Kilcormac to come back into it. When they got the goal and a point, it took away a lot of our good work, brought the lead back to six or seven points and that’s nothing in hurling.”

The tempo was well set although there was a certain amount of looseness on both sides with possession getting turned over and poorly placed passes. Yet there was also great commitment with blocking and hooking disrupting attacks.

There no disguising the danger Cuala posed, though. Content to pick off points in the first 10 minutes, starting with a 65 from David Treacy who put in a tour de force from dead-ball positions - 10 from 11 during the afternoon - and supplemented by a brace of scores from Colum Sheanon.

KK had been warned that Con O’Callaghan’s prodigious season was still rolling when he ran Ger Healion ragged in the first 60 seconds only to get bottled up inside. They weren’t so fortunate 11 minutes later when the Cuala 14, playing in a two-man full-forward line for added impact, again burned the full back and this time rapped in the goal despite goalkeeper Conor Slevin getting a touch.

It was curious that in the light of previous opponents’ experiences not alone did Kilcormac choose not to double-mark O’Callaghan but they matched him with a player who lacked pace.

Six ahead, 1-3 to nil, Cuala kicked on and five points in as many minutes, including two apiece for Colm Cronin and O’Callaghan left Kilcormac singed as a Christmas pudding. The latter was quieter thereafter but 1-2 in six minutes creates tolerance for that.

The champions were also dealing with the loss of their captain Paul Schutte - his brother Mark, as expected not having recovered in time to play - with a hamstring pull on 22 minutes.

This disrupted what had been a very impressive half-back display, as the line was destroying their opponents in the air. Jake Malone switched back and Cian Waldron joined the attack and no lasting damage was done.

“Seán Moran especially was exceptional,” said Kenny. “He drifted across the line; I thought he did really, really well on the puck-out, as did John Sheanon and Paul Schutte.

“Paul going off was a bit of a loss to us because I thought he was playing exceptionally well at the time. That half-back line dominated very strongly which was a big help to us.”

Kilcormac clawed a way back into vague contention. Ciarán Slevin pointed a free and Mahon got a sweeping stick to the break off a long Peter Geraghty delivery and the ball ended up in the net. At 1-2 to 1-10 after Slevin had pointed a free, Cuala might have felt a bit frustrated at the break except that the contest was effectively ended by Mahon’s two-for-the-price-of-one red card.

Winning captain Paul Schutte said that he had been cautious about any notional advantage the extra man might bestow.

“We saw that they went a man down against Mount Leinster Rangers and they kicked on - they played better from there on so we were wary of them coming out for the second half.”

The Offaly champions rejigged their line-up, sending Ger Healion, who had switched off O’Callaghan with Enda Grogan taking over, up to full forward.

They were impressively combative on the resumption. Peter Geraghty ran some battling tracks at Cuala and scored two points but an opportunity to shave another three off the margin went abegging when Slevin’s penalty - awarded when Dan Currams was taken down by Cian O’Callaghan - was athletically saved by Seán Brennan six minutes into the second half.

Spirit would take them only so far and as they faded. With the luxury of playing Moran as the spare man - he also went full length to scramble away a goal opportunity in the 47th minute - Cuala were never under sustained pressure.

They embroidered, stitch by stitch, their winning tapestry. Treacy’s frees punished indiscipline almost unerringly and the match wound on to its inevitable conclusion.

Galway champions Liam Mellows are next on Cuala’s radar in the 2018 All-Ireland semi-final.