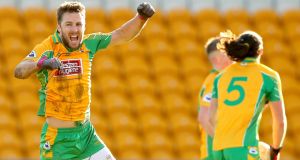 Corofin manager Kevin O’Brien said they are likely to appeal the dismissal of full-forward Martin Farragher in the opening minute of Saturday’s All-Ireland club football semi-final.

He paid tribute to the way his players rallied to book a place in the All-Ireland final against either Nemo Rangers or Slaughtneil despite playing most of the game at O’Connor Park in Tullamore with only 14 men.

“The sending off was so early it probably gave us time to get organised and get into half-time and focus on things. We probably kicked the ball away too much in the first half and the lads were brilliant in the second half.

“I’ve talked so much about this bunch for so long but they were an absolute credit today,” said O’Brien.

He said that they would now have to deal with Farragher’s dismissal which came after he contested a high ball with Moorefield full-back Liam Healy.

Television replays suggested that a yellow card was probably the most that was required but referee Derek O’Mahoney from Tipperary, having consulted a linesman, flashed a red card.

“I presume we will,” added O’Brien when asked if they would appeal.

“I need to talk to the club officials. It just looked harsh from where I was standing. I feel sorry for Martin. We talk about discipline so much and for the decision to be made out of his control like that I don’t think it was right.

“I thought it was harsh. I’ve seen it again on TV. I don’t think Martin’s knee went to make any contact with the player; I thought the player went to ground I wouldn’t say easy but without any contact.”

His men never trailed and after turning around deadlocked at 0-2 each after a poor opening half, Corofin opened their shoulders on the restart and hit points from Gary Sice, Ian Burke and Ronan Steede put them 0-5 to 0-2 ahead after 36 minutes.

But then the impressive Dylan Wall delivered a pinpoint pass to Ian Burke and he sent Liam Silke through on goal and the corner-back slotted the ball to the net with a sublime finish.

Wing-back Kieran Molloy cut short the celebrations to rush to Dublin and came on for NUIG in the second-half of their Sigerson Cup final loss to UCD, a side that goalscorer Silke should have been playing for.

It was an added feature to a bizarre day for Corofin and manager O’Brien said they would now take stock before having a crack at lifting the All-Ireland title for the third time in history.

“We’ll enjoy this and gather our thoughts. Two very good teams, haven’t really thought about it but we’ll be looking forward to going to Croke Park, having a go at it and seeing where it takes us,” he added.

Moorefield manager Ross Glavin said that it was a disappointing way to end their journey but he was proud of the way his men battled.

“It’s a horrible feeling. It’s not a nice dressing room to be in. When you get to this stage, there are small margins in it but to a man I can’t fault any of the Moorefield players who have represented the club, the town and the county as positively as they have done for the last 14 months.

“It’s a strange game. When a player gets a red card early in a game and you’re playing quality opposition their game-plan becomes totally restructured and it becomes very difficult to break down. Roles were reversed in the county final when we did tremendously well with 13 players.

“Maybe it was nerves but I’m sure they were a bit nervous as well and the first half was what we thought it was going to be, cat and mouse and a tight battle. We were prepared for that. When we came in at half-time we were where we expected to be,’ said Glavin.

Tianna Bartoletta: ‘After you’ve gotten your medal, you become black in America again’ 09:00
Matt Williams: World needs team sport more than ever in these tough times 07:00
Ian O’Riordan: An education in race and running during college days in America 07:00
Mature Ringrose keeping the ups and downs of rugby life in perspective 06:00
Pinatubo could light up Newmarket’s Guineas weekend 06:00
Crossword Get access to over 6,000 interactive crosswords