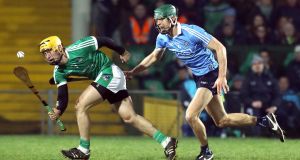 Limerick’s Tom Morrissey gets away from Dublin’s Chris Crummey during the Allianz Hurling League Division 1B match against Limerick at the Gaelic Grounds. Photograph: Lorraine O’Sullivan/Inpho

Limerick brushed aside a disappointing Dublin in a one-sided affair at the Gaelic Grounds, the sole consolation for the visitors was that they scored three of the last four points of a game that was as good as over at half-time.

Tom Morrissey had the opening two points for Limerick inside as many minutes and Cian Boland had Dublin’s first a minute later.

Limerick’s Aaron Gillane was a pre-game doubt but he not only played but contributed 1- 9 before he was replaced after 47 minutes.

Though the game produced 44 scores it also had 21 wides with the only goal arriving after 25 minutes when Dublin goalkeeper Alan Nolan came off his line and fouled Séamus Flanagan and Gillane slotted the penalty to have Limerick 1-9 to 0-5 clear.

By half-time Limerick led 1-13 to 0-7 with three of the Dublin points coming from Donal Burke frees.

Not surprisingly manager Pat Gilroy made a couple of substitutions at the break for Dublin but they badly needed a big start. They scored first with another Burke free but Limerick had points from Gillane, Flanagan, who hit two in a row, a Gillane free and Ger Hegarty.

By that stage it was 1-18 to 0-8 and after 63 minutes of the second half Limerick were in total control.

Danny Sutcliffe had an excellent outing for the visitors who were a little fortunate not to have lost by more.

Goalkeeper Nolan, apart from conceding the penalty, made three superb saves, whereas at the other end Nickie Quaid was not called on to make any major stop.

Limerick’s biggest worry at the finish was the number of injuries to key players and manager John Kiely will also have to keep an eye on UL’s Fitzgibbon Cup action next Saturday as five of his panel will be involved.

Limerick have now won three from three in the league as they head to Antrim next Sunday.

Kiely will take encouragement from the fact that captain Declan Hannan returned for his first league outing and he had a fine game at centre back with Diarmuid Byrnes also impressing beside him.

Cian Lynch made some great lay-offs from midfield and Flanagan had a terrific outing in attack, ably helped by Tom Morrissey and David Reidy.

Dublin traditionally make matters difficult for Limerick but no so on this occasion. Goalkeeper Nolan, Sutcliffe, Conal Keaney and David Burke, for his five points from frees, were best of a poor Dublin side.